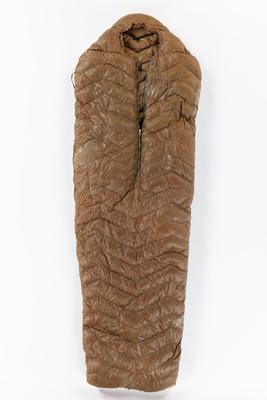 Brief History
This Fairydown 'Everest' sleeping bag was used by Derek Wright on the Commonwealth Trans-Antarctic Expedition in 1957-58.
Wright was a member of the New Zealand party led by Sir Edmund Hillary, which laid supply depots to support the final leg of Sir Vivian Fuchs' successful overland crossing of the continent. Wright was also one of the group who reached the South Pole on Ferguson tractors, the first expedition to do so in motorised vehicles.

Thank you for sharing this.

Yes, I bought a Fairydown sleeping bag in 1967 and still have it today, 2020. A unique feature is the unzip at the foot for warm nights.