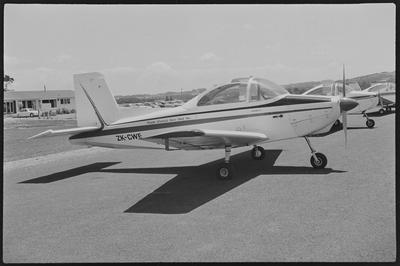 Description
Negative number 35a on a film strip. Image of a ZK-CWE AESL Airtourer 115 parked on tarmac. View is of starboard side, aircraft has a stripe from nose to tail. Above stripe on fuselage is illegible writing. Aircraft is in a row of other aircraft which can be seen in background right, behind the nose of the ZK-CWE. On the vertical stabilizer is ZK-CWE. In the background to the far left is a building with a vehicle and sign in front. In the centre background is a carpark with multiple vehicles.