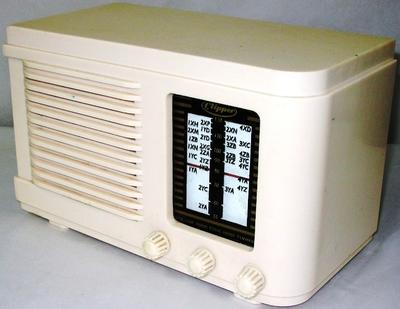 Description
Clipper mantle radio. Serial No.98228. White plastic case with speaker on the left and band panel on the right. There are 3 turning knobs on the front. On the left is the volume knob, in the centre is the tone knob and on the right is the tuning knob. A red band selector needle, which lies in a horizontal plane, moves up and down when the tuning knob is rotated.

Brief History
This valve radio was designed and manufactured by Akrad Radio Corporation in the late 1950s. Akrad is an acronym for ‘Auckland Radio’ which was founded by Keith M Wrigley in Waihi in 1932. In 1953 Akrad became associated with PYE Radio Ltd of England and successfully launched New Zealand-made radios into the market. By 1958 Akrad employed more than 200 people in its Waihi factory.
Valve radios such as this were superseded by the more portable and compact transistor radios in the 1950s and 1960s.