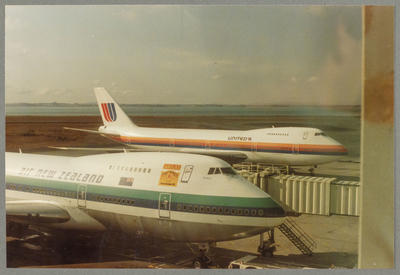 Description
Colour photograph of two aircraft parked besides a terminal building. Nose of Air New Zealand Boeing 747 is in foreground of image; aircraft view is of starboard side; aircraft is white with blue and teal stripes; 'DALLAS FORTWORTH FROM OCTOBER 28' next to cockpit; 'TAINUI' under cockpit window; 'AIR NEW ZEALAND' on fuselage; Air New Zealand Koru symbol on vertical stabilizer; tunnel bridge is on port side of aircraft. Behind is a United Airlines aircraft, aircraft is white with red, orange, and blue stripes; 'UNITED' on fuselage; United Airlines symbol on vertical stabilizer. Photograph is taken through a window, edge of window on right of frame. Likely Manukau Harbour visible in the background.