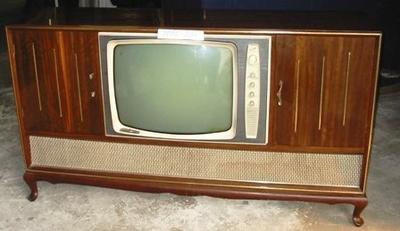 Brief History
Bell Radio-Television Corporation released the first of its low-cost radiograms in 1953, and these helped cement the company’s position in the market for New Zealand-made radios. This later radiogram complete with television, builds on the popularity of Bell’s radiograms by introducing the new medium of television.
Broadcasting in New Zealand in the 1950s was limited to radio, although political discussion about television was well underway, particularly considering the start of television broadcasting in Australia in 1956. Experimental licences were issued to a number of enthusiasts, including Pye and Canterbury University, who demonstrated television across the country from 1951. NZBS, the New Zealand Broadcasting Service, also demonstrated television at its Shortland Street studio.
Al Bell, the head of Bell Radio-Television Corporation, had a closed-circuit television system built in the company’s Dominion Road factory. With the exception of imported picture tubes and coils, all the equipment was manufactured locally. Bell began transmitting in Auckland on Experimental Station ZL1XQ in May 1957, eventually broadcasting three hours of content three nights a week. His licence, issued by the Post and Telegraph Department, required him to broadcast only still or repetitive images, however he sourced films and brought entertainers into the studio to perform.
Bell’s broadcasting efforts are often credited with hastening the introduction of public television broadcasting in New Zealand. Bell though, as a manufacturer, wanted to be making television sets rather than broadcasting, and his broadcasts were a means to that end, creating market interest in his product. Initially he imported British-made televisions, until in 1959 he announced Bell were ready to began mass production of television sets in Auckland.