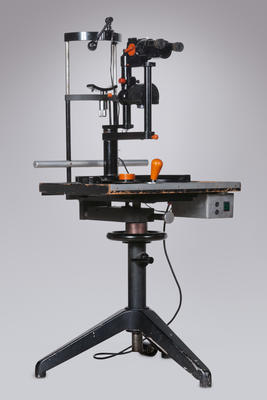 Description
A Littmann slit lamp biomicroscope. Used at the University of Auckland School of Optometry and Visual Science. This is the first Littmann Slit Lamp biomicroscope to be used in the North Island. The manufacturer, Carl Zeiss New Zealand, is subsidiary of the German company Carl Zeiss AG.

This biomicroscope was used in Northland, likely by a specialised clinic. This type of technology was used by Opthalmologists, before becoming an instrument by Optometrists. It was a vital step in examining the eye for contact lenses.

This example consists of two parts: the base table, and the biomicroscope. The base section is a three-foot pedestal table with the chin rest supports mounted at one end. Several levers and knobs can be operated to adjust the positioning of the microscope relative to the patient. a light is attached to the top of the unit and is connected to a power supply box on the underside of the table. A power cable is connected to the power box.. The microscope unit rests on top of the table with the biomicroscope being mounted horizontally so that the eye of a patient seated at the chin-rest can be seen by the optometrist seated on the other side of the table. Magnification is from 6x to 40x. The slit lamp can be swivelled around in front of the biomicroscope.