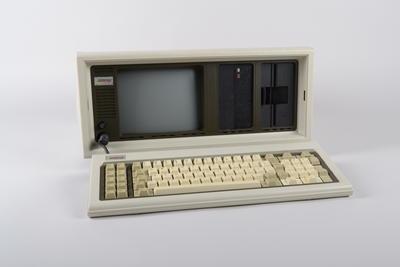 Description
Part 1: Square, portable computer. White plastic with a brown carry handle. Each side has "COMPAQ" in the right corner. The computer is laid down on its side on two feet and the bottom is removed with two switches to display the computer screen and keyboard within. On the right side is the COMPAQ logo and a brightness dial. Next to this is the display screen and floppy disc drive. The bottom of the computer/keyboard is connected with a black, spiralled cord. "COMPAQ" is printed in the top right corner of the keyboard. On the bottom of the computer is engraved text, "CAUTION / DO NOT OPERATE UNIT / WITH KEYBOARD CLOSED".

Part 3: Grey cable with plug at each end.

Brief History
The Compaq portable computer was released in March 1983, the first product launched by Compaq, established in 1982. It is the first IBM PC compatible computer. Compaq went on to produce the world’s bestselling personal computers in the late 1980s and early 1990s.
The donor purchased this computer in Canada in July 1984 when he was about to return home to New Zealand following 5 years living in Canada. Computers were an expensive item to purchase in New Zealand in the 1980s and the MOTAT collection holds several computers bought overseas in the 1980s and brought home by New Zealanders.