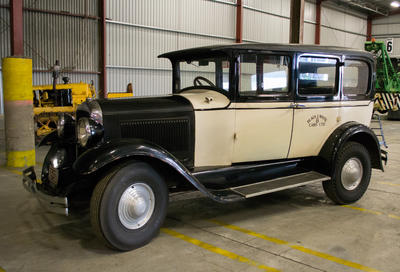 Description
1928 Studebaker Dictator 6. Painted as black and white taxi. The wheels are not authentic. Capable of about 50 mph (80 kph).
Black and white vehicle. Royal Automobile Club Association, AA, badge attached to headlight beam at the front of the grill. Leather roof of the vehicle, Spare tyre attached to the back of the vehicle, white material blinds around the back windows.

Brief History
This vehicle, built in 1926, spent the first part of its life in Te Aroha, and had five owners before 1936. It was then bought by Norman Leaf of Matakohe in Northland, who owned it until the 1970s. It was purchased by MOTAT in 1978 and was painted as a Black and White Cab soon after. The Auckland Cooperative Taxi Society (ACTS) contributed to the cost of this. The ACTS incorporates all the taxi companies which previously operated in Auckland - Atta, Auto, Black & White, Checker, Chess, Diamond, Red Bond and Red Top.

1928 was the first year that Studebaker produced the Dictator - formerly called the Standard Six. The Dictator was to ‘dictate the standard’ that other vehicles would follow. When German dictator Adolph Hitler rose to power in the 1930s, the name became controversial, and no more ‘Dictators’ were produced after 1936.