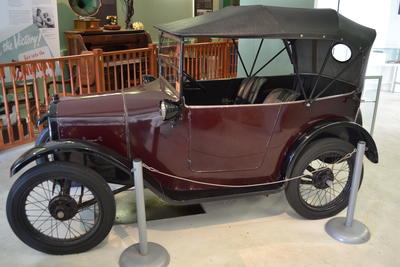 Description
1925-26 Austin 7. Maroon body with black mudguards, soft top. Powered by a 747 cc (46 cubic inch), 4-cylinder, water-cooled engine, 7.8 HP with 3 forward gears and 1 reverse. Fuel consumption is over 60 mpg and could do up to 50 mph (80 kph). Front wheel brakes have been added for road safety - not authentic. The brakes are on all 4 wheels - pedal operated on rear wheels, hand-lever operated on front wheels.

Brief History
The Austin 7, or ‘Baby Austin‘, was the British version of the Model T Ford - mechanically simple, cheap and reliable. First produced in 1922, it became extremely popular in many countries including New Zealand. Both the Austin 7 and the Model T Ford made taking a Sunday drive in your own car possible for the average family. In 1929 an Austin 7 would cost a New Zealander £178, while a Studebaker President Sedan would cost £840.

During the 1920s American cars were still more popular in New Zealand. To advertise the reliability and economy of the Austin 7, one was driven non-stop from Auckland to Wellington and back. An Austin 7 was also driven to the summit of Rangitoto Island in 1927. The 1920s saw a general trend in design and popularity from soft-top to hard-top vehicles.