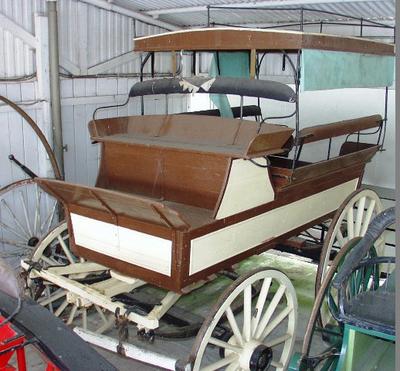 Description
Royal Mail and passenger coach. Roll up blinds, roof rack, brown and cream colouring. Built by Siddle Smith and Woodman, Whangarei in 1908. Served in Kaitaia-Mangonui district until 1923, driven by well-known Northland character, 'Joker' Harris. Restored by Motat upon aquisition in 1965. See photo in 'Transport Pavilion Guide', MOTAT publication. Also referred to as the "Waiwera Coach" in MOTAT documentation, this is actually more like a modified wagonette which might have been altered to serve as a coach during its working life, or modified while at MOTAT in the course of its last restoration. It is a 4-wheeled vehicle. Its current colour scheme is brown and cream paint with green canvas. Roof of carriage has been separated from main body

Brief History
The ‘Royal Mail coach’ is a modified wagonette which was built by Siddall Smith and Woodman of Whangarei in 1908.

A wagonette is a four-wheeled horse-drawn vehicle, with two rows of passenger seats facing each other. This vehicle has been converted into a coach during its working life. The rail on the top of the roof would have allowed bags to be stored there.

Coaches were an important form of transport throughout New Zealand. This coach was operated in Northland, between Mangonui and Kaitaia up until 1923. As well as carrying the ‘Royal Mail’ they also took passengers from town to town or to the nearest railway station. Slowly the horse-drawn coaches disappeared as motorised buses, cars and locomotives took over.

In those days the roads were of a poor standard, if there were roads at all. The coaches would sometimes travel along river beds or beaches, often getting bogged down in mud, or sometimes washed away while crossing flooded rivers.

In 1965 MOTAT purchased this coach and a restoration was completed.