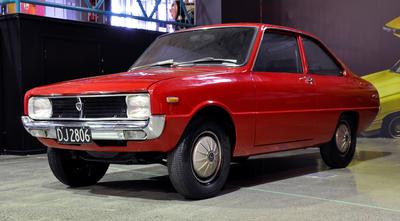 Brief History
Known in Japan as the Mazda Familia Rotary Coupe, the Mazda R100 was one of the first cars produced with a rotary engine.

From the 1960s, as a way of distinguishing themselves from other Japanese car manufacturers, Mazda put considerable effort into perfecting the Wankel rotary engine.

Like a piston engine, the Wankel rotary is an internal combustion engine. However, the Wankel engine converts pressure into a rotating motion instead of the reciprocal motion produced by a piston engine. This process takes place in a chamber formed by part of the housing and sealed in by one face the rotor, which has a Reuleaux triangular shape.

The design of the rotary engine makes it more powerful than a comparatively sized standard piston engine. Although the Mazda R100 engine is half the size of a regular 6-valve engine, it can produce the same horsepower as a piston engine up to 2–3 times its size. However, this extra power comes with higher fuel consumption.

such an elegant car! any photos about this <a href="https://www.wapcar.my/cars/mazda">Mazda</a> ?