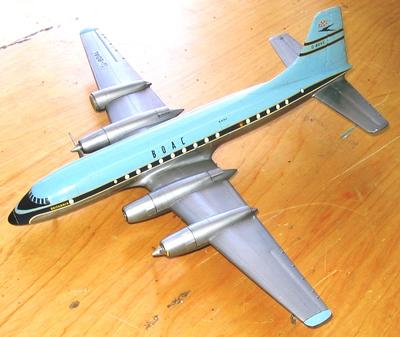 Description
Plastic model aircraft in blue, grey and yellow. BOAC on nose and on body. "BRITANNIA" in gold on nose. Union Jack flag on tail fin, also speed bird insignia on tail fin. Nose and front of cockpit - black. There are two engines on each wing, one of each of the engines has propellors. The aircraft has two sets of 4 wheels, these are staioned under the inner engine on each wing. The wings are silver with blue tips.