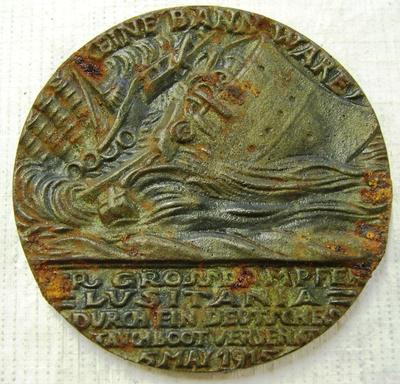 Medal (Medallion) [Sinking of the Lusitania]

Description
Medallion - from the sinking of the "Lusitania". The medallion is made of bronze and depicts the ship sinking on the obverse side. Only the bow of the sinking ship is discernible. There are some wordings in German and a date right at the bottom: "5 May 1915".
On the reverse are depicted some people queuing up at a counter manned by a skeleton.

Brief History
This medallion was commissioned to commemorate the sinking of the British ship "Lusitania" by a German submarine on 7 May 1915. This was the final act that brought the Americans into active combat with the Allies.

One side of the medal has the sinking ship, with armaments falling over the foredeck. Words below the image read 'Der gross-dampfer Lusitania durch ein Deutsches tauchboot versenkt 5. MAI 1915’ which translates to ‘The liner Lusitania sunk by a German submarine 5 May 1915'. The image on the other side shows people buying their tickets for the voyage from death's representative, a skeleton.

Stuck by Karl Goetz, a German medallist, this medal was quickly used as a propaganda tool by the British. The Germans maintained the "Lusitania" was carrying arms to the Allies and warnings had been issued, however the inaccurate date was used to show pre-planning of the attack.

This medallion was donated to MOTAT during 1980.

Medal (Medallion) [Sinking of the Lusitania]