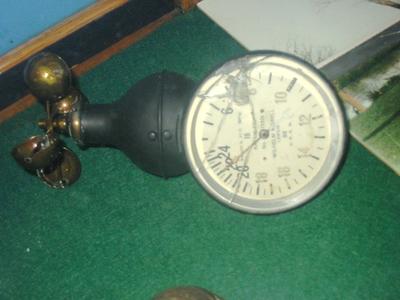 Description
Anemometer, German type No.113924. Early airspeeed indicator. Metal gauge with a round dial under a glass face. The metal back on the dial casing rises to an orb-shape with a 20 mm high metal collar on top of the orb. Fitted over the collar is a copper fixture with four 25 mm diameter copper cups acting as wind receivers. The cups are secured on a central axis which appears to activate the hands on dial of the anemometer. The dial reads 0-24 with numbers running 6, 8, 10, 12, 14, 16, 18, 20, 22, 24. There are interval markings between the numbers. These are at .5 intervals. The manufacturer's name on the white face dial is - Wilhelm Morell No.13924. There is a thread filling on the base of the gauge for securing the unit.