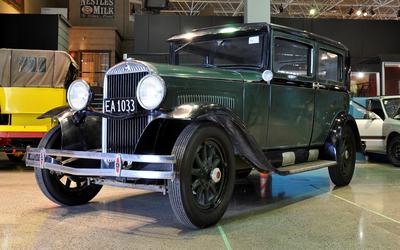 Description
Essex Super Six 4-door sedan motor car circa 1930-31. The car was a popular model in its day and second only to Ford. 6 cylinder, 55 HP, 2.6 litre with 3 forward gears and 1 reverse, petrol driven. Dark green body with black mudguards. Rear spare tyre attached to the back of the vehicle.

Brief History
The Essex Super Six was produced by the Hudson Motor Company as a lower-priced version of their Hudson Super Six. The Essex was an affordable economy car that was reasonably popular in New Zealand.

Until the 1920s, most cars came in an open style known as a touring car. The first examples had few windows if any and in many cases did not even possess a windscreen. Fully enclosed cars did not become standard until Cadillac introduced them in 1910. However, with a price tag of over US$2,000 the closed body was beyond the means of most consumers. In 1922, the Essex Super Six became the first affordable enclosed car, beginning a change in car preference that remains to this day. The design of the car was changing from the ‘horseless carriage’ to the style of car we know today.

By 1929 hard-topped cars - saloons, coupes or sedans - made up 37% of all the vehicles sold in New Zealand. This compared with the earlier style of open-topped vehicles - tourers and roadsters – which only made up 28%.