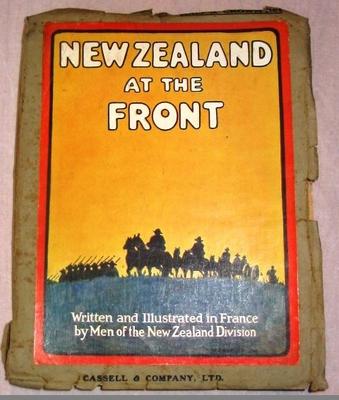 Description
The title: New Zealand at the Front appears in white block letters. The caption: Written and Illustrated in France by Men of the New Zealand Division, appears in white block letters at the bottom of the page. The cover illustration depicts a yellow sky and the silhouette of infantry and troops on hoseback. The book has 180 pages and is printed in black ink. It has both black and white as well as colour drawings. The book contains stories, poems and drawings. A Kiwi wearing a hat is printed on the back cover.