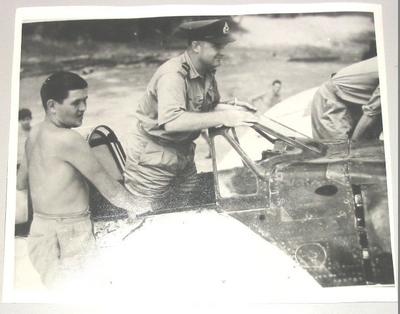 Description
Black and white photograph of Geoff Roberts, in uniform, inspecting a cockpit of an aeroplane. Roberts is standing inside the cockpit and another male figure stands next to the aeroplane in the foreground. Neither one is looking at the photographer. A photocopied caption is attached to the back of the photograph. It reads: 7417. Japanese Aircraft Flown by New Zealander (underlined). This Japanese aircraft found in serviceable condition by the Kara airstrip, Bougainville, was flown to Piva airstrip by Wing Commander W.R. Kofoed, D.S.O., D.F.C. The photograph is of Air Commodore G.N. Roberts, A.F.C. (Commander of New Zealand Air Task Force) inspecting the cockpit. Handwritten under the caption is: Now on display at the Auckland War Memorial Museum.