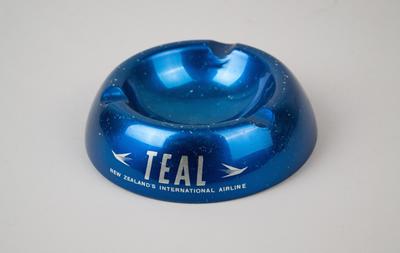 Description
Circular, metallic blue plastic ashtray. The sides are rounded as is the top rim and then the sides slope down to form a half circle depression in the centre. There are 3 circular notches in the top rim spaced equidistance apart. On the outside is written in white: "TEAL / NEW ZEALAND'S INTERNATIONAL AIRLINE" with TEAL logo (stylised bird) on either side in mirror image. The same decoration is repeated again on the opposite side. The underside is hollow and features the maker's mark in the centre. "S.O.C.T.A.L. Varese, Modello denositato, Made in Italy".