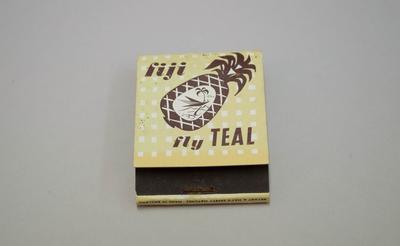 Description
Yellow and white empty matchbook with brown decoration. The cover, which tucks under the striking surface along the bottom, says: "fiji fly TEAL" in brown. It also has an image of a pineapple with a tropical scene and the TEAL logo (a stylised bird) inside it. Along the top edge is "Tasman Empire Airways Limited" and along the bottom edge "Bryant & May's Safety Matches, Made in England". The matches have been removed and so has the staple that held them in.