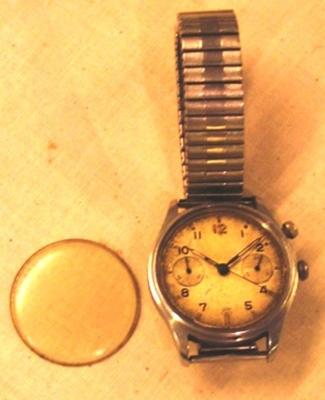 Description
Metal wristwatch with elasticised metal wristband. The face has the number written in black except the 12 and 6 in white and the 9 and 3 don't appear. The latter are replaced with 2 smaller sub-dials, one with a scale to 30 and the other to 80. There are 3 hands - the hour and minute hands have a cut-out rectangle on them. There are 2 crowns to the right of the watch case - one at '2' and one at '3'. There is a plastic cover which has come off. The wristband is made up of a series of metal pieces that can expand. Written on the underside of almost all the pieces is "Fixoflex". Just below the dial are the following inscriptions: "Made in Germany", "Edelstahl" and "Acier Inoxydable".