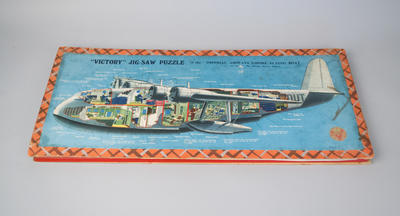 Description
A jigsaw puzzle with wooden pieces (6 mm thick) that form the image of an Imperial Airways Flying Boat. They sit inside the inlaid aeroplane in the puzzle base. The box has a rectangular cardboard lid featuring a colour cartoon-like image of an Empire Flying Boat. The side of the aircraft is not drawn-in revealing the cabin and crew areas in the interior, all of which are labelled. Across the top it reads: "Victory" Jig-Saw Puzzle of the Imperial Airways Empire Flying Boat (as used for The Atlantic Survey Flights)". There is a yellow and red seal stuck on in the bottom right corner that says: "Victory". The underside of the lid is undecorated, but has the story of The Empire Flying Boat printed in black on white background. Also included is a rectangular colour poster featuring colour cartoonish image of The Empire Flying Boat. The view of the aircraft shows the interior plan and crew areas which are labelled. Along the bottom is a picture of a town at night. In the top left corner is text detailing information about the airplane.