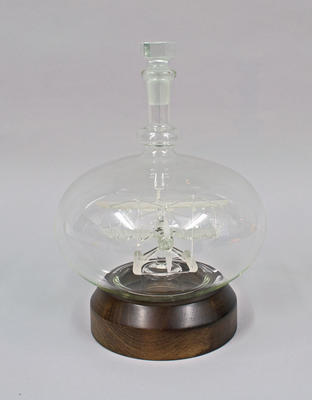 Description
An ellipsoidal glass container in which has been contained a glass model 2-seater, biplane - an early Boeing model. The little aeroplane has a single propeller with a pair of skids for landing on water. There are 2 persons inside the aeroplane, one behind the other. The entire aeroplane is made of glass including all the struts, to the minutest detail. The glass container sits on a round wooden base which has felt on its underside.

Brief History
This trophy was presented by Boeing Aircraft Company in 1992 to the Trustees of the Walsh Memorial Scout Flying School Trust. The original intention was to present the trophy at the annual Scout Flying School held at Matamata in January, but the delicate nature of the trophy suggested otherwise. The association with Boeing comes from the use of the original Boeing seaplanes by the Walsh brothers.

The Trust has the aim of perpetuating the memories of pioneers of sustained flight in New Zealand, in particular Leo and Vivian Walsh; and of furthering the interest and development of aviation in New Zealand.

The Board of the New Zealand Aeronautical Trust have gifted the trophy to MOTAT for appropriate public display.