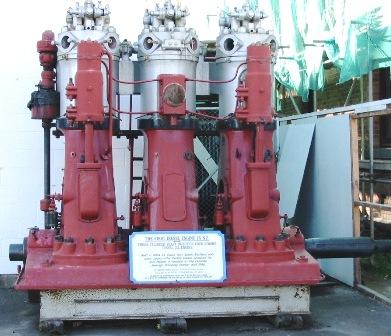 Description
The first diesel engine in New Zealand, this Sulzer 3D40 is a 3-cylinder blast injection 4-stroke diesel oil engine.
Cylinder bore: 310 mm
Piston stroke: 460 mm
120 BHP at 190 RPM
Cylinder Nos.37-38-39
The end of compression stroke fuel is blown into the cylinder by a blast of compressed air. This engine was restored by The Union Steamship Company, Auckland.
Has been painted black over earlier red paint.

Brief History
This Sulzer diesel engine was made in 1904 by Sulzer Brothers, Switzerland, and imported into New Zealand in the same year by the Dunedin Drainage and Sewage Board. It was one of two Sulzer diesel engines purchased by the Board to drive the pumps in the Musselburgh Pumping Station, newly built to alleviate ongoing problems in Dunedin with drainage and sewage. Diesel engine technology promised significant economies of fuel consumption over proven steam engine technology. The diesel engines began operating in 1905 and were used at Musselburgh until their replacement in the late 1950s.

Steam engines were still the dominant source of power for industry in New Zealand in 1905, and this diesel engine and its companion were the first in the country, indeed the first in the Southern Hemisphere. Their purchase, coming soon after the perfection of the compression ignition diesel system and the commercialisation of the technology in 1897, represents a relatively early adoption of new technology and indicates significant faith in the improved efficiency proclaimed for diesel engines.