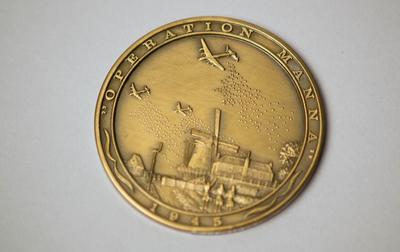 Description
The 40th Anniversary medal issued in 1985 as a commemoration to the historical 1945 'Operation Manna' carried out when food supplies were dropped by the Allied Forces over Holland and to its people who had suffered during the German occupancy. The obverse has embossed 4 important figures and Heads of State. Interspacing between them are 4 food labels saying: Cheese Tinned 11 lbs., Dried Eggs 5½ lbs., Bacon Tinned 15½ lbs., Potato Mash Powder 16 lbs. Below this is a stack of tin foods marked "Sugar", "Milk", etc.
Reverse: 3 aircraft are embossed depicting food drops over a typical Dutch countryside. Sacks of food can be seen pouring out of the aircraft and on the ground below are some people waving their hands standing in front of a farm with a windmill. The medal says: "Operation Manna 1945".