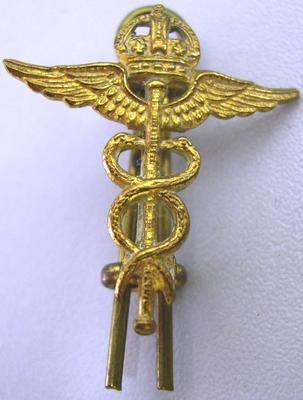 Description
A badge with pair of outspread wings and a crown on top. A pair of snakes are intertwined around a rod in the centre between the wings. On the back of the badge are 2 loops through which passes a split pin for attaching onto the uniform. It is relatively common, especially in the United States, to find the caduceus, with its two snakes and wings, used as a symbol of medicine instead of the correct 'Rod of Asclepius', with only a single snake. This usage is erroneous, popularised largely as a result of the adoption of the caduceus as its insignia by the US Army medical corps in 1902.