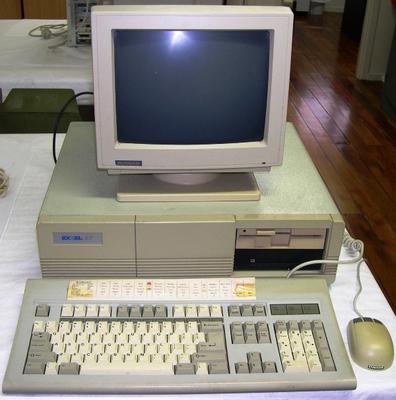 Description
Computer - Exzel branded, MS-DOS (Microsoft - Disk Operating System) based with 8088 chip. This is the first IBM (International Business Machines) compatible version computer available in New Zealand.
-1 System Unit is marked "Exzel XT" and is flat (not tower type), Serial No.3278686. There is a red, plastic ON/OFF switch on the right side.
-2 Monitor - Microware USA Limited, Model No.HMM-1200, Serial No.MKMW83003372, AC 220 Volts, 0.2 Ampere, 50 Hz, manufactured: June 1988. The monitor has a 12" (300 mm) screen measured diagonally. There is a small black ON/OFF switch on the rear of this unit.
-3 Keyboard - standard type keyboard with plastic cover.
-4 Mouse - QMouse, Model No.X-20S, Serial No.018965, with a variable resolution of 20 ~ 6400 DPI (dots per inch), manufactured by Qtronix Corporation, Taiwan. The mouse is a single unit with 3 darker shaded click keys in the front. The mouse comes in its own plastic box.
-5 Booklet - Exzel 'Unpacking Guide'.
-6 Booklet - Exzel 'Specifications/Options'.

Brief History
Exzel branded computers are believed to be the first IBM PC compatible computer available in New Zealand. In 1980 IBM developed a personal computer in response to Apple's rapid success in the burgeoning market for personal computers. On 12 August 1981, the first IBM PC (Personal Computer) went on sale. There were several operating systems available for it, but the best remembered is the DOS (Disk Operating System), the cheapest. IBM licensed DOS from Microsoft; IBM’s version was called PC-DOS and was sold as an "add-on" to the IBM PC. In a crucial concession, almost unnoticed by either party at the time, IBM's agreement also allowed Microsoft to sell its version, MS-DOS, for non-IBM platforms.

Thanks for commenting; the item is not for sale. For independent valuation please contact an auction house or private valuation company.

Hi i am interested in buying this device but i cannot find a price range for it. is it for sale?