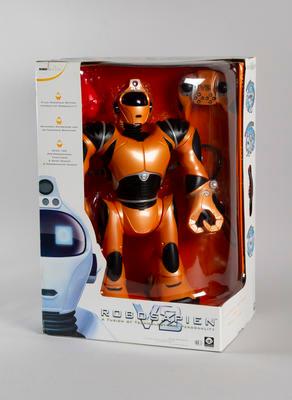 Description
An orange and black plastic toy robot with orange, black and silver coloured remote control for user to operate. Inside original plastic and cardboard packaging- cardboard base and outer with clear plastic window for display, plastic strapping holds toy in place within packaging. Toy comes with accessories used by toy in play: three red bowling pins and a green ball. Slogan for marketing is 'ROBOSAPIEN: A FUSION OF TECHNOLOGY AND PERSONALITY' and 'HUMANOID ACTIONS AND BEHAVIOURS!' Recommended for children above 8 years. Battery powered : 6 D size batteries and 4 AAA size batteries (Robosapien) and 3 AAA size batteries (Remote controller).
Invented by Mark Tilden.

Robosapien V2 is the second generation of this robot. It is larger and has a setting of pre-recorded phrases. It is able to grip, recognise colours through basic colour recognition sensors, and is able to move (waist, shoulders and hands).

Brief History
WowWee Robotics is/was a leader in manufacturing entertainment robotics. The Robosapien V2 is a humanoid robot, built to respond to touch and is programmed with 160 verbal commands. Robosapien's body is articulated so the robot can bend at the waist, shoulders, arms and wrists.

Battery powered and operated via a remote control (and with the option for not using the controller), Robosapien has stereo sonic sensors, the ability to determine colours and can be programmed.

Although not retailed in New Zealand, Robosapien is an example of advances in robotics during the mid 2000s. 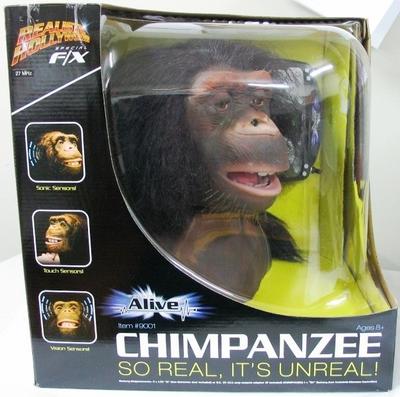 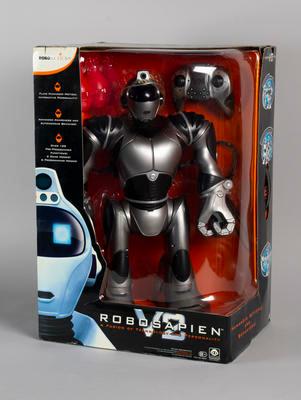