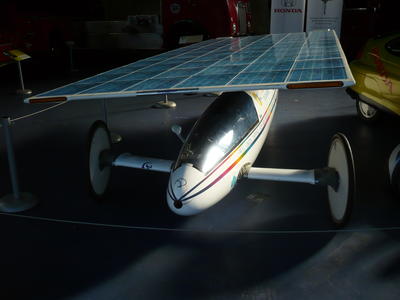 Description
A solar powered car, designed and built in New Zealand. On Sunday, November 7th, 1993, 52 fragile solar-powered vehicles left Darwin to travel 3000km across the centre of Australia to Adelaide in a race described by the organisers as "The event of the future" In the 1993 World Solar Challenge the car came first in three classes: Private Entry Class Using Lead Acid Batteries Using Commercial Solar Cells. Also received the 'Best Team Spirit' award, and placed 15th overall in a field of 52. 2008.17.2 = Trailer. The car came with a trailer, in which it is stored when it is not on display. 2008.17.3 = Automatic battery charger model 9603 MAST / PP 2008.17.4 = Support frame. There is a triangular metal frame wrapped in red / yellow tape (see pic) which supports the solar panel while the car is in storage.

The "Solar Panels" on the top of this car are actually laminated strips made to look like solar panels (Seen in this condition on 06/11/2014). The original solar panels were apparently sold prior to MOTAT owning the vehicle.