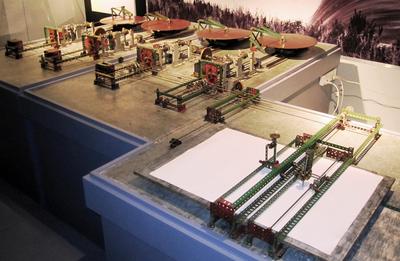 Description
The Cambridge Meccano Differential Analyser is a mechanical analogue computer which solves differential equations by integration. It makes use of one or more wheel and disc integrators, interconnected by shafts in various ways to suit the problem equations.

Brief History
The first full scale Differential Analyser was built in 1931 by Vannevar Bush at the Massachusetts Institute of Technology (MIT) in the United States. Douglas Hartree saw this machine at MIT and on his return to Manchester University he set about constructing a small scale Meccano-based model with the assistance of Arthur Porter in 1934. This is commonly known as the Meccano Differential Analyser No. 1.

The Manchester machine proved to be so successful that a second Meccano Differential Analyser was constructed at the Cambridge University Mathematical Laboratories by J B Bratt under the direction of Professor J E Lennard-Jones in 1935. This is known as the Meccano Differential Analyser No. 2, and is the machine currently at MOTAT. It initially had four integrators; a fifth integrator was added by Maurice Wilkes in 1937. During the Second World War (1939-45) it was co-opted for military use, and various improvements were made to it at this time under the direction of Dr J Crank.

Dr Harry Whale, who had used the Meccano Differential Analyser No. 2 briefly while studying at Cambridge, bought it for £100 in 1950 and had it shipped to New Zealand for use in his research at the Seagrove Radio Research Station in Auckland. It subsequently saw service at the Applied Mathematics Laboratory of the DSIR in Wellington until 1961.

This machine is believed to be the first analogue computer to be used in New Zealand and the only remaining working Meccano-based Differential Analyser in the world, out of about 15 constructed during the period 1934 to 1951.