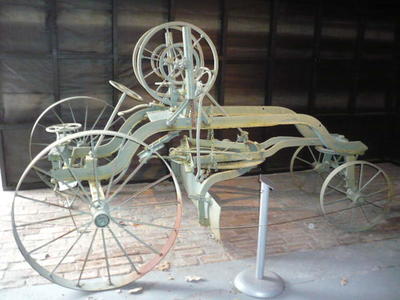 Brief History
This machine was pulled by a team of four to six horses (or a traction engine when on hard ground) and used in the construction of roads. Made in the USA by the Western Wheeled Scraper Co, the scraper operates by making successive shallow cuts and gradually working the excavated material from a lower to higher elevation.

It consists of a scraper blade suspended from a frame, which is mounted on four wheels. The blade is hung so that it can be placed at any angle, horizontally or vertically. It is adjusted horizontally by means of a circle and adjusted vertically by the wheel operated gear lifts. A simple mechanism allows the frame to be shifted across the axle, allowing one wheel to run alongside a ditch when making a cut. The rear axle is pivoted in the centre, so that the rear wheels may be inclined in either direction to counteract the side draft.