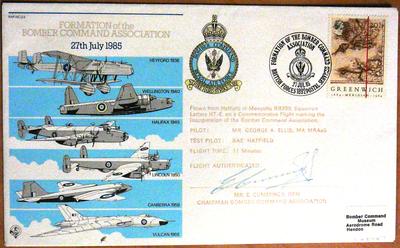 Membership of the Bomber Command Association shall be open to all aircrew, ground crew, WAAF and WRAF of the Royal Air Force and Dominions Air Forces, and all those Allied Air Forces who served within the framework of Bomber Command during the period 1936 to 1967.

Proof of ability to comply with these conditions should be given. Subscriptions will be on a Voluntary basis of a minimum Annual 5 pounds or Life Membership of 25 pounds or donations each according to personal means. Membership of the Association will not be dependent upon a person's ability to contribute.