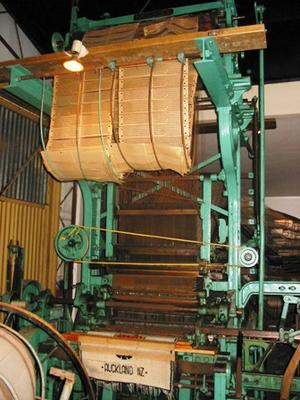 Description
Weaving loom made by J T Hardaker Ltd, with the motor manufactured by The English Electric Company Limited.

1. The carpet design is reproduced by a series of punched cards.
2. These cards are positioned one by one on the revolving hexagonal cylinder.
3. Where blank spaces occur on the cards, a coloured needle pushes through a lifting peg.
4. The lifting bar then moves upwards and catches the pegs that have been pushed through.
5. This, in turn, raises the selector and carrier bars bringing the selected colours to a fixed horizontal level for presentation to a row of grippers.
6. The gripper, shaped like a bird's head, takes a piece of pile yarn, cut to required length by the knife assembly.
7. The gripper then moves to the bottom position to implant the tufts before returning for another piece of yarn.

The woven carpet is moved forward intermittently by the spiked take-up roller and, after passing beneath the weavers platform, it is wound onto a centre which is suitably supported.

Brief History
Invented by Joseph Marie Jacquard in 1801, the Jacquard machine is added to a power or hand loom to simplify the manufacture of textiles with complex patterns such as brocade, damask and lace. Together the machine and the loom are known as a Jacquard loom.
The Jacquard machine is controlled by a series of punch cards which carry the pattern to be woven. Each card has multiple holes cut or punched in it and one card at a time is presented to the loom's needles. Where there are holes a needle goes through and where there aren't the needles are blocked. Multiple rows of holes are punched on each card, with each complete card corresponding to one row of the pattern. Each time the weaver presses down the loom’s treadle a new card is presented to the needles. The many cards that compose the complete design of the textile are strung together in order and create a repeating pattern.
The Jacquard machine was the first machine to use punch cards to control a sequence of operations. Although it did not do any computation, it is considered an important step in the history of computing hardware. The ability to change the pattern of the loom's weave by simply changing cards was an important conceptual precursor to the development of computer programming. 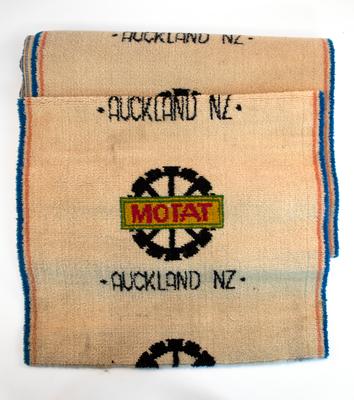