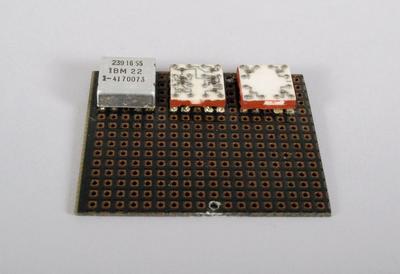 Brief History
Miniaturisation of components and storage devices as well as circuitry has been at the forefront of advances in computer technology since the early electro-mechanical computers.
Transistor technology, developed in the late 1940s, eventually reached a high level of miniaturisation along with significant performance and reliability advances. The equivalent of one pluggable card of transistors could now be housed in a module measuring one square centimetre, as seen in this Solid Logic Technology module card, introduced by IBM in 1964 with the IBM System/360 series and related machines. Performance improved so that two 10 digit numbers could be multiplied 400,000 times per second.