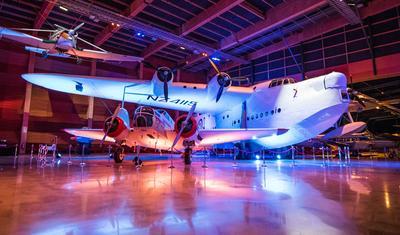 The Short S.25 Sunderland flying boat was designed in the early 1930s to United Kingdom Air Ministry specifications for a four-engine monoplane to serve in coastal patrol and long-range reconnaissance roles. The design was based on the Short Brothers S.23 Empire flying boat but featured a more advanced aerodynamic hull and was outfitted with various offensive and defensive armaments, including machine gun turrets, bombs, aerial mines and depth charges. It also had detection equipment to aid combat operations, including the Leigh arc light, which was an anti-submarine device, radar and an astrodome. The array of machine guns earned the aircraft the nickname of ‘Porcupine’ (Stachelschwein) from German pilots during the Second World War.
The Sunderland was used by Royal Air Force (RAF) Coastal Command during that war as an integral part of Search and Rescue (SAR) missions, maritime patrol and anti-submarine warfare, and the RAF continued to use the Sunderland in a military capacity up to 1959. Around a dozen aircraft participated in the Berlin airlift from mid-1948 to mid-1949, delivering supplies to the blockaded German city, and between mid-1950 and September 1954, several squadrons of RAF Sunderlands saw combat action during the Korean War.
The aircraft were also used by the French Fleet Air Arm, the South African Air Force and the Royal New Zealand Air Force (RNZAF).
A number of Sunderland Mark III aircraft were converted for use within the civil sector, where they were known as the Short Sandringham. TEAL (Tasman Empire Airways Limited) used the Sandringham known as ZK-AME ‘New Zealand’ on the trans-Tasman route between Auckland and Sydney from September 1946 until the Short Solent flying boats arrived in 1947.
The Sunderland Mark V, of which the aircraft known at MOTAT as NZ4115 is an example, was developed in 1944 from the Mark III by replacing the latter's Bristol Pegasus engines with more powerful Pratt and Whitney Wasp 14-cylinder radial air-cooled engines.
NZ4115 was built by Short Brothers, Belfast in 1945 for the Royal Air Force (RAF) as SZ584. It was then held in reserve by the RAF, probably at 57 MU (Maintenance Unit) at RAF Wig Bay seaplane base in Scotland. From May 1946 to April 1948 it was loaned to the BOAC airline (British Overseas Airline Corporation) for crew training and was flown as G-AHJR.
SZ584 was then reconditioned and delivered with 15 other Mark V Sunderlands to the RNZAF in 1953. They were used by 5 and 6 Squadrons based at Laucala Bay in Fiji and at Hobsonville air base in Auckland, and the Maritime Operational Conversion Unit. The Laucala Bay Sunderland squadron was there to meet New Zealand’s obligations under the ANZAM agreement. This was a Commonwealth defence plan - the name was derived from the countries it encompassed: Australia, New Zealand and British-ruled Malaya - and its initial concern was the protection of wartime sea communications in the area.
By the early 1960s the RNZAF began to consider replacing the flying boats with modern land-based aircraft. In 1962 the establishment of six Sunderlands with 5 Squadron in Laucala Bay was reduced to four. In 1966, 5 Squadron returned to Whenuapai and was equipped with Lockheed Orions, but a detachment of two Sunderlands was left in Laucala Bay to cover routine commitments. In 1967 these two were finally withdrawn from Laucala Bay and the base closed. On 2 April that year, the last RNZAF Sunderland, NZ4107 flew back to Hobsonville – the last official sortie of these old flying boats.
NZ4115 operated with No 5 Squadron as KN-A, KN-B and then as KN-Q (Queenie) and then at Hobsonville airbase with the Maritime Reconnaissance Support Unit. In 1966 it was gifted to MOTAT, officially handed over in September that year, and presented in December 1966 by the Minister of Defence. It arrived at MOTAT in February 1967 having been towed down the Waitemata Harbour and dragged over Meola Road, Point Chevalier to its resting place outside at what is now MOTAT 2.  It has undergone restoration and conservation work at different times since its arrival at MOTAT, and since 2019 NZ4115 has been a feature inside the Aviation Display Hall at MOTAT 2.
Significance:
MOTAT’s Sunderland is one of the rarest aircraft in the collection. It is one of four remaining in the world and the only example in New Zealand. Of the 16 RNZAF Sunderlands, two remain intact - NZ4115, and NZ4108 (which is still airworthy) in the Kermit Weeks Museum at Orlando, Florida, USA. The flight deck of NZ4112 is at Ferrymead Museum, Christchurch, and parts of various Sunderlands are in the collection of the Air Force Museum of New Zealand.
Short Sunderlands gained a mighty reputation for their capabilities - most often remembered for their anti-submarine role - but equally respected for their search and rescue abilities. In the end, around 750 examples were produced in four distinct marks - Mk I, Mk II, Mk IIIA and the Mk V, of which NZ4115 is an example.
The Sunderland illustrates New Zealand’s long political relationship with the Pacific Islands dating back to the nineteenth century, and while it was a military aircraft and used by the RNZAF, it was also used to give much civilian aid. The lack of runways in the Pacific in the early post-Second World War years, as well as the huge areas of ocean between the scattered Pacific islands meant that the Sunderland was an appropriate aircraft for the RNZAF units based at Laucala Bay in Fiji. While they did much routine patrol work, the aircraft were much loved and appreciated for the civilian search and rescue and mercy missions they carried out. This included anything from searching for missing fishermen and survivors from aircraft wrecks to looking for missing vessels. They also dropped off emergency medical equipment and picked up sick or injured people and took them to hospital. 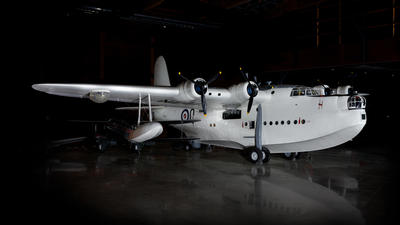