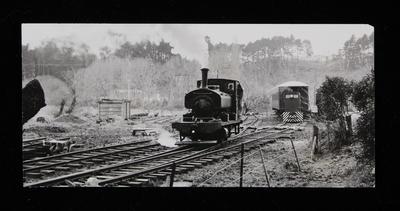 Barclay on the bush railways

Barclay 1270 was ordered through Barclay’s New Zealand agents, Richardson Blair & McCabe in Wellington, and outshopped on the 24th April, 1912. It was ordered for the Taupō Totara Timber Company (TTT Co.) to use on their railway line which ran south from Putāruru towards Taupō, where sawmills were located at Mōkai. The 81-kilometre (52 mile) line was used by the company to carry logs to the sawmill and timber to the New Zealand Railways line at Putāruru for distribution.  Forestry and mining were big drivers of the development of railways in New Zealand, with mining companies building some of New Zealand’s earliest lines (Leitch, 1972; Atkinson, 2007).

The TTT Co.’s line was one of the largest bush systems in the North Island and trains also included a passenger coach for moving people and supplies to isolated settlements in the area (Whebell, 1969; Leitch 1972). Bush railways were an important way of connecting rural settlements before sealed roads and car ownership were prominent in New Zealand, and it was not uncommon to see a mixed passenger-freight train (Atkinson, 2007). The Taupō company’s Mōkai Railway was operated between 1903 and 1944 and was then acquired by the Public Works Department and put into use again in 1947.

The choice of a Barclay

Barclay 1270 was shipped to New Zealand in kitset form and assembled. After receiving is first boiler inspection in Auckland on the 17th of July, 1912, 1270 was put to work running out of Putāruru and became number 6 in the TTT Co. fleet.  As built, it was a conventional Barclay 0-4-0ST with 10”x18” cylinders.  This means a locomotive with 4 driving wheels, which carries its water in a saddle tank above the boiler and has cylinders 10 inches in diameter with an 18-inch stroke. Barclay locomotives of this type followed a relatively standardised design and examples for industrial use could be found across the world.

In New Zealand an essentially identical Barclay (No.1186) had been supplied to the Taringamutu [sic] Totara Saw Mills three years earlier, and it is possible this influenced the Taupō company’s selection of the design for 1270. However, whilst the Taringamotu locomotive had operated satisfactorily in similar conditions, 1270 proved not entirely suitable and is believed to have been too heavy for the TTT track. To remedy this situation the locomotive’s frames were lengthened, and it was converted to a 2-4-2ST. The extra wheels fore and aft were to distribute the locomotive’s weight across a greater area and provide additional stability when running.

The Barclay was operated by the TTT Co. until 1924 when it was sold to the Auckland Gas Company (AGC). AGC also purchased locomotive 0-4-0ST Peckett from Pukemiro Collieries and both the Peckett and Barclay were transported to Auckland by rail. They were shunted down Quay Street to Queen’s Wharf, craned off the rails and shipped to the Western Wharf, and then craned on to the AGC Railway. The locomotives were required for the company’s new railway line which ran from the Western Wharf and down the centre of Beaumont Street to the gas works to transfer coal carried by coastal ships to the gas works for production. At this time AGC was still a significant producer of coal gas, until the 1960s when natural gas began to be piped to Auckland from the Kapuni gas fields (Cough & Associates, 2005).

The Barclay is believed to have entered service in early 1924 for the ACG. The leading and trailing pony trucks (wheels) fitted by the TTT Co. were soon removed because of the problems caused by the many tight curves on the AGC railway. The locomotive thus reverted to an 0-4-0ST but retained the increased length that was added the same time as the pony trucks. This long overhang at each end became an odd quirk that the locomotive has borne ever since.

In 1947 the locomotive was overhauled by A&G Price at the Thames foundry and received a new boiler made by this company in the process. The overhaul was initially commenced by Mason Bros., an Auckland engineering company whose workshop was located near the AGC railway.  The reason for a change of contractor mid-way through the project remains unknown. The completed locomotive was dispatched from A&G Price’s works on 5 December 1947 and was transported back to Auckland on top of a Ub flat wagon.

The new boiler was given the identification number O.N.50131 by the Marine Department and was first inspected at Auckland on the 14th of January in 1948. This boiler was designed for a working pressure of 200lb per square inch, as the original 1912 one had been prior to being de-rated from deterioration. The A&G Price boiler, still on the locomotive today, strengthens the objects significance and tie to New Zealand manufacturing. This heavy engineering company was founded in 1871 and has made a significant contribution to producing industrial equipment, including 123 steam locomotives for New Zealand Railways between 1904 and 1928 (Engineering New Zealand, 2019).

In mid-1959 the locomotive was knocked off the track by a heavily laden Winstones’ truck. To rerail the locomotive, steel strips were laid on the road surface which the locomotive ran along until the front wheels were back in line with the track. A crane then lifted the rear of the locomotive and swung the back on to the track, allowing it to steam away under its own power and resume duties.

The Gas Company ceased rail cartage of coal in late 1959 and the locomotive was sold to Pukemiro Collieries in 1960.  The colliery at Pukemiro was the first coal settlement on the West bank of the Waikato river with an operational history between 1911 and 1967 (Waikato District Council, circa 2016).  Barclay 1207 was trucked from the gas works in December 1959 for use by the colliery in train haulage.  It went to the Auckland railway yards and it was unloaded by steam crane 200 ready to be railed south. The new owners used the locomotive to haul trains between their colliery and the New Zealand Railways (NZR) station at Pukemiro, a distance of about 1km.  Normal traffic comprised empty wagons into the colliery and full wagons back to Pukemiro, plus the daily passenger shuttle which met certain NZR trains to pick up and drop off miners who travelled to and from work by train. This passenger service utilised an old NZR suburban carriage owned by the colliery (A851) which is also preserved in the MOTAT Rail Collection.

After the closure of the mine in 1967, the locomotive was donated to MOTAT by the mine’s owners, Neill Cropper Holdings, who also covered transport and overhaul costs.  In preparation for transferring the locomotive to Auckland a team of volunteers built a loading ramp at the colliery, steamed the locomotive, and placed it ready for winching on to a transporter. However, things did not go to plan and when the transporter arrived it was discovered that it was impossible to get such a large truck up the roadway to the colliery. To make matters worse, in the intervening period removal of the track in the yard had commenced and the locomotive found itself marooned on a small section of track unable to go anywhere at all! There was some track available, but it was not long enough to get the locomotive back to the truncated line. The solution was to incrementally lay small sections of track, manually bar the locomotive on to that and then dismantle the original section of track. After several rounds of dismantling and reassembling track, the locomotive was finally back where it needed to be. It was a hard day’s work for the dedicated volunteer team!

The final part of the move to MOTAT went far more smoothly, with the locomotive being railed to Huntly, loaded on to a truck by NZR’s Cowans & Company Limited on diesel crane No.500, and then trucked to the museum on 28 November 1969.

Following some minor repairs, the Barclay was first steamed at MOTAT on 16 April 1970. Exactly one month later the locomotive was used to haul the very first passenger trains on the then new ‘lower railway’ at MOTAT 1 (where the Waitākere Station is located today). For the next two years the Barclay saw frequent service for visitors to the museum until mid-1972 when the locomotive was withdrawn from service needing a new firebox.  As of 2020, recent restoration work should see the Barclay back on the rails for the enjoyment of MOTAT visitors once again.