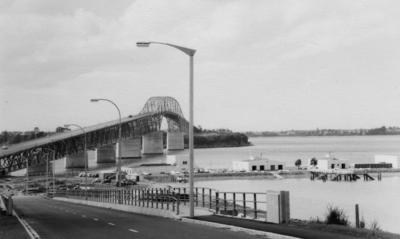 The Auckland harbour bridge was opened on 30 May 1959 by Prime Minister Walter Nash. It had taken over 200 workers around 4 years to build.

Originally the bridge had four lanes of traffic, two in each direction. By the late 1960s this was not enough to cope with demand and two lanes were added to each side of the bridge. They were built by a Japanese company, IHI (Ishikawajima-Harima Heavy Industries Company) so the additions became known as the 'Nippon clip-ons'. (Nippon is an ancient name for Japan.) The new lanes were opened to traffic in 1969.

Tony Railton worked in the Auckland Harbour Bridge Authority's maintenance department after the bridge opened to traffic. He was responsible for checking the bridge framework and the roadway to ensure that all was in good order, as well as managing the painters, taking responsibility for health and safety, and various other aspects of bridge maintenance, such as ensuring the lights were all working and that the grass areas on the approaches to the bridge were kept mown.

Painting the bridge was a constant job. There were about 20 painters working on the bridge, divided into four teams. They used five coats of paint — each was a different colour so that they knew what stage they were up to in the painting. The painters used a sand blaster to prepare the surface, taking care that they did not damage the zinc-sprayed surface of the steel used in the bridge's construction.
The weather was not always suitable for painting, so on those days the painters would wash the salt off the steel work using high pressure hoses. Tony recalled that they did not really notice the traffic noise while working, although it 'could be fairly windy and in winters it was quite cold'. There was a boat at the south anchorage of the bridge in case anyone fell off the bridge and needed rescuing. Fortunately, it was never needed.

Every part of the bridge was painted — some parts both inside and out. Tony walked over the arch to inspect paint to see if it needed work — this was before there were hand rails. 'It's all right if you don't look down. It's not like tightrope walking,' he recalled, but the arch is only about 60cm wide. He wore a plastic helmet. 'That was the only safety gear we had. No ear muffs; nothing like that … [but] we were all pretty careful.'

The painters would also report back on any damage they noted while working, such as bolts which had popped and needed replacing.

Other regular maintenance work was a night light check once a week. A lane of the bridge would be closed while the electrician went up on a cherry picker to change the orange sodium vapour lamps if needed. All the lamp posts were numbered which helped when Tony saw maintenance work that was needed during his fortnightly checks when he walked the bridge and access roads checking for surface damage. (A Bridge Authority vehicle followed along behind him to keep him safe.) The road surface on the bridge itself, which was laid on top of concrete, wore 'pretty well', but the Fanshawe Street approaches which were on reclaimed land often showed soft patches and needed repair. This was done in the evenings, or overnight if it was a big job.

Tony worked for the Harbour Bridge Authority for 24 years. He enjoyed the job because it meant spending a lot of time outdoors, but also because of the variety of the work. He was the maintenance superintendent for his last four years on the bridge.

Walsh Memorial Library has interviews with engineers and others who worked on the construction of the Auckland harbour bridge, as well as people who worked in the toll booths. The library also has an extensive photograph collection showing the bridge being built as well as other material related to the bridge. 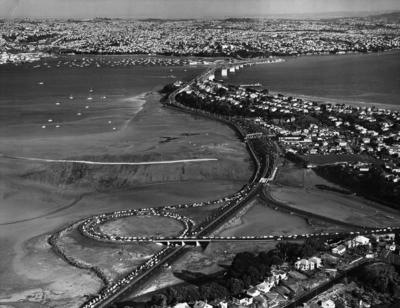