The Human Story of an Adana Press 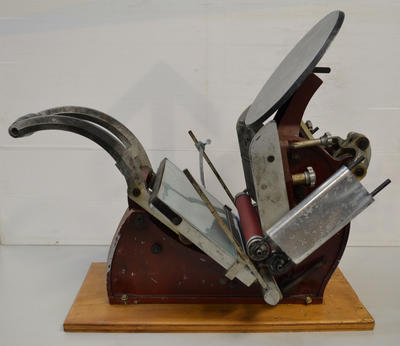 The printing press is an Adana printing machine (2010.423) dating from 1931. It is operated manually. Adana printing machines were manufactured from 1922 to 1999 in Twickenham, England by the Adana Agency. The company rebranded as Adana (Printing Machines) Limited in 1946. Caslon Limited, took over the company in 1987 and continued to manufacture the more popular models of Adana presses until 1999.

At the heart of the small press movement in the United Kingdom, the Adana is one of the most popular letterpress presses worldwide. Letterpress is a technique of relief printing, where movable type is composed into a “bed” or “chase” of the press and an impression on the paper is created by inking the type and pressing it against paper. Although most of the printing presses produced by Adana were aimed at hobby printers, they were also used commercially. These presses were built to last and are virtually indestructible. As a result, the manufacturer had a policy of supplying parts, because there was so little need to buy new machines.

The earliest Adana models were flat-bed presses. However, the company became most famous for their ‘Eight-Five’ model named due to the chase being 8 by 5 inches, and other vertical platen presses.

In 2016, due to a resurgence of interest in letterpress printing as a hobby in previous years, and as a commercial product, the Adana ‘Eight-Five’ was put back into production by Caslon Limited. The relaunched press is known as the ‘85C’ with the C standing for ‘Caslon-made’. Both old and new Adana machines can still be found today in the hands of enthusiasts and professional printers throughout the world.

MOTAT’s Adana printing press was donated by Hazel Skilton, who was a very compassionate and inspiring individual. The press was bought new by Hazel in her teens and was used throughout her career. Hazel was the founder of Occupational Therapy New Zealand – Whakaora Ngangahau, she also established the Occupational Therapy Whakaora Ngangahau Hazel Skilton Founder’s award. This award honours the work and leadership of Hazel Skilton and is open to practitioners who demonstrate the values show by Hazel, which include dedication to occupational therapy practice, services to others, mentoring and captivating leadership.  Hazel was interviewed as part of MOTAT’s oral history programme. The interview revealed an extraordinary life and career.

Rene Stacy Skilton (nee Barton) (always called Hazel) was born at home in Wellington in 1914. In the early 1930s she set up a secretarial services business with her sister in the AMP building in Wellington. Her sister was three years younger than her and they were very close: ‘like twins’, Hazel said. Hazel saved money and purchased the Adana printing press from London for use in the business, where her sister undertook shorthand and Hazel the printing. Hazel taught herself how to set type and work the machine successfully, while holding the manual for the printing press in one hand.  It required great attention to detail to produce an error-free copy, as it is easy to overlook one letter. Utilising the Adana press, Hazel printed a variety of work including wedding invitations, thank you cards, business cards, letterheads and envelopes with addresses. The Adana enabled Hazel to print up to a maximum sheet size of 20 x 25 centimetres.

The Barton sisters’ business was successful. There were not many businesses around at the time offering this kind of service, which certainly would have contributed to its success. Hazel recalled incidents that occurred while working at the business in her oral history, including a client who was put out that the printer was a woman and hesitated about paying. Hazel informed her father, a magistrate, who got lawyers involved, which resulted in a hasty payment! Hazel explained that prior to World War Two it was very unusual for a woman to run her own business. The onset of war in 1939 caused supply problems for the business, and as a result the Barton sisters decided to close.

During the war, Hazel learnt about occupational therapy after reading a copy of the Reader’s Digest magazine. Developing her interest, she applied to attend an occupational therapy training course in the United States. Unfortunately, the war meant that she couldn’t travel overseas, but in 1940 she became the first student to train in occupational therapy in New Zealand, registered as student number one. Dressed in a yellow smock uniform, Hazel trained at the Auckland Mental Health Hospital (later Carrington Hospital) on Carrington Road, Point Chevalier with a tutor from England. Due to demand for their services, she was sent out into the workforce quickly, with only six months training, wearing a uniform of a green with white-collar button-down smock with a brown cape. Her first clients were servicemen returned from the war. Hazel did get to study overseas, however. Many years later she was able to go to Canada to do a postgraduate course.

Hazel’s work with the servicemen depended on their disability, but often involved social work, as well as occupational therapy. Her aim was to get the patient back into normal living again, after the terrible experiences of war. In her oral history, Hazel recalls a man who was blinded during his war service. She taught him how to weave on a big weaving loom. He also said he wanted to make a leather suitcase, she cut one out and punched holes in it, and he stitched along it by feeling the holes. Hazel mentioned that the occupational therapists at the time: ‘adapted with what we had to suit their disability or illness’. Hazel also used her Adana press in her work as an occupational therapist to assist with rehabilitating people. She explained that she: ‘taught people to set up type, [it was] good exercise for their arms’. She recognised that the core value of occupational therapy is that it gives hope: ‘I’ve seen people in hopeless conditions, and occupational therapy helped them to take up their lives again’.

During her career, Hazel worked with hundreds of returned servicemen. She was transferred where she was needed for work, which took her to many places in the country, including Hamner Springs. Rotorua and Dunedin. Her employer was the Mental Health Department which became part of the Health Department in 1948.
Hazel, as an early leader in occupational therapy, recognised the need for a national organisation. As a result, from Hazel’s casting vote the New Zealand registered Occupational Therapists Association Inc was formed in 1949. In 1950, Hazel saw the position of principal for the New Zealand Occupational Therapy Training School in Auckland advertised. She applied and was asked to start the following week. Hazel also held the position of supervising therapist of the Department of Health and maintained these dual positions till 1958.

To help boost publicity and awareness of the occupational therapy profession, Hazel printed the association’s monthly newsletters on her Adana press. She also aimed to establish a forum to share ideas and learning, by holding association meetings at the Occupational Therapy Training School in the grounds of the Auckland Mental Health Hospital in Point Chevalier. These meetings occurred on Friday evenings after work and Hazel would bring her pressure cooker to cook a meal, which would be shared.
After her marriage in 1959, Hazel stopped working as an occupational therapist. One of her reasons for leaving the profession was that she felt out of date with her training, as there had been great changes since she started work. Hazel and her husband Norm went to India, where they did voluntary work at a mission station.
Along with her occupational therapy career, Hazel experienced some very significant events in national and international history. She recalls many of these in her oral history.

One of Hazel’s most vivid memories as a child was the end of World War One. She was living in Gisborne at the time and recalls people jumping on the running boards of her Dad’s Hotchkiss car celebrating.

At the age of 8 or 9, also in Gisborne, Hazel saw her first aeroplane. When she was 15 years old, she went on her first flight. The Australian aviator, Charles Kingsford Smith was offering plane rides at Whanganui for 10 shillings. The last flight of the day was for policemen, Hazel’s Dad managed to persuade Hazel and her sister to join the ride. Little did they know, but the police had been promised a thrill ride and the plane dive bombed – not the best experience for your first time on a plane! Hazel then met Kingsford Smith at a reception in Whanganui and had her photo taken with him. She was, of course, wearing her best clothes.

While saving for her occupational therapy course, Hazel worked as an usher at a local cinema. Seeing films at the cinema was a very different event during this time. Most sessions consisted of news prior to the film’s commencement and there were not many advertisements, contrasting with today’s cinema experience. Before the film people would stand for the national anthem. Hazel remembers seeing her first talking film - which she described as a ‘miracle’ - when she was in her twenties in Wellington. Before the ‘talkies’, dialogue in films was conveyed by mime and by written title cards.
The Great Depression of the 1930s had little impact on Hazel’s family due to her father’s occupation. In her interview, Hazel mentioned that people would come to her family’s front door begging for a job or selling items such as boot laces. She recalls her father giving a man the job of wallpapering their study. Her family often gave people meals and clothes during these years of economic hardship. Hazel vividly remembers the Napier earthquake of 1931. She was in an office in Wellington and the lights swung and hit the ceiling. Another big quake followed shortly after, that caused the family to sleep downstairs in the front hall, as there were chimneys on either side of house which were a high-risk during earthquakes.

Hazel’s father, John Saxon Barton was one of two commissioners appointed to supervise the rehabilitation and reconstruction of Napier after the earthquake. He was away from home for two years doing this work and Hazel, left at home in Wellington with her mother, was given power of attorney to pay the bills, she was only 17 years old at the time.

Some significant events occurred for New Zealand in 1953. The first, in May, was that Edmund Hillary and Tenzing Norgay were the first confirmed climbers to reach the summit of Mount Everest. When she lived in India, Hazel and her husband, Norm met Tenzing Norgay and his family.  On 24 December 1953 the Tangiwai rail disaster occurred. Hazel remembers listening to the radio, eating a plum and swallowing the stone in shock when she heard the news. Surprisingly, this did not put Hazel off future travels by rail. During the Royal visit to New Zealand in the summer of 1953-54, Queen Elizabeth II took the opportunity to visit relatives of some families whose relatives had died in the Tangiwai disaster. After a long and eventful life, Hazel passed away on the 25 January 2015 aged 101 years.

MOTAT’s Adana printing press is an example of a popular and well-used object, that is significant in printing history.  It also reflects the life of a New Zealander, who was alive during key events of New Zealand’s history in the twentieth century. Discovering – and making known – the human stories behind MOTAT collection items is one of the joys of working in a museum. It connects a person to an object, allowing insight into the relationship between the donor and, in this case, the Adana printing press.

The Human Story of an Adana Press 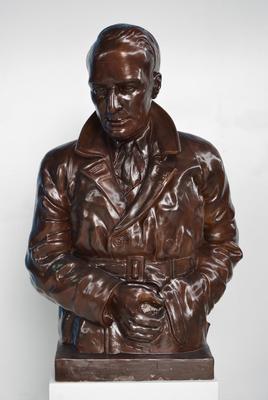 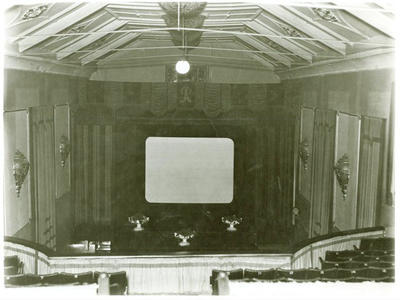 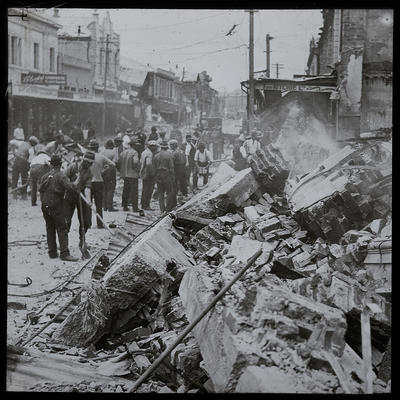