‘I Am the Last Tram’

Graham Voitre began his apprenticeship as a coach painter with the Auckland Transport Board in June 1948. This old-fashioned term meant that he would be learning to paint the tram bodies. His apprenticeship was for 5000 hours or five years.

He spent the first year of his apprenticeship rubbing down trams and sweeping the floor at the workshop. He also became the ‘lunch boy.’ It took about six weeks to paint a tram. ‘All the windows were taken out … everything was rubbed down by hand. Inside the tram the panels were kauri ply but sometimes replaced by aluminium panels. The seats were all done separately. The floor was rewarewa. We had a small booth where we spray painted all the small items that belonged to the tram car, such as the seats and the seat backs and the window frames.’

At that time all the tram frames were spray painted outside the ATB’s Manukau Road workshops with six or seven undercoats. After each coat was applied, the tram body was sanded by hand to get a flat finish for the next coat. ‘We used sanding blocks and, at times, just the bare hands. And at times you would end up with bleeding fingers.’ The final coat was painted by hand.

The destination blinds were also painted at the Manukau Road workshops. They were done on a long table, with the names of the roads and suburbs where the tram was going spray painted using stencils.

‘My foreman sent me over to do it. He just wanted it rough because he said, It’s the last tram. He told me to do it roughly because it wouldn’t be used again’. Graham painted the words with a big paint brush. He does not know who thought of the phrase. ‘I was just told to paint it.’

And tram 242? It was sold in 1957 to Ted Russek of Thames, and later used as a bach in Koitiata at the mouth of the Turakina River (south of Whanganui). In September 2006 it was sold. MOTAT believes that the Whanganui Tramways Trust retrieved some minor items from it before it was demolished in November of that year.

Citation
Hutching, Megan. 2019. ‘I Am the Last Tram’. New Zealand: The Museum of Transport and Technology (MOTAT).

‘I Am the Last Tram’ 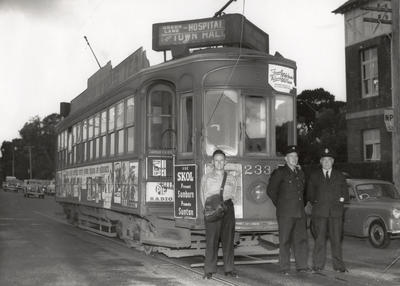 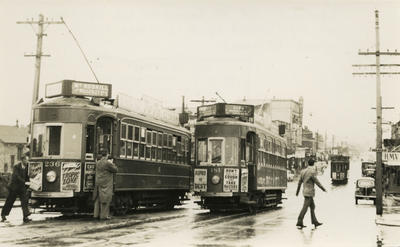