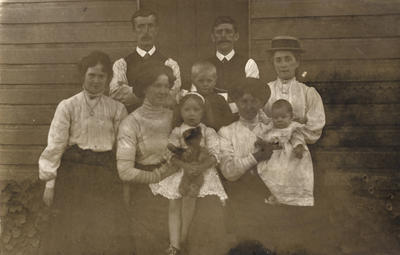 In 2020 the Museum of Transport and Technology’s (MOTAT’s) many christening gowns were re-examined, hoping to shed some more light on the Collection. This collection currently contains about 105 gowns.

Christening gowns have been present within the Christian ritual of Baptism since the 18th century. Before this, infants would be wrapped in swaddling clothes, which were long strips of cloth, preventing the infant from movement during the ceremony. By the 17th century the ritual had changed. The infant was now fully immersed in the holy water which meant their dress needed to be easily and quickly removed. Swaddling cloths were still used, but now had added lace dressings such as a bib, bonnet, sleeves, mittens and a bearing cloth (a cloth with which a child is covered when carried to baptism). Eventually, during the 18th century, swaddling cloths were discouraged as they were believed to restrict development. Moreover, the Baptism ceremony no longer required full immersion in the holy water, so infants began to be clothed in a more decorative gown which mimicked those of adult clothing.

The result of these changes led to the Victorian style christening gown, recognisable today. By the 19th century, christening gowns resembled adult women’s dress, often long in length and worn with a petticoat underneath, of which MOTAT has several within the Collection. These christening gowns are often characterised by a short bodice, gathered at the waist with drawstrings, and a ‘V’ shaped yoke. These garments were designed to be worn during the ceremony and were items of display — the more intricate the gown, the more means a family had. One feature that remained throughout the centuries, however, was the colour: white. White symbolised purity and innocence, a reminder of the original sin that is to be washed away during the baptism.

Many of the christening gowns in MOTAT’s Collection were produced in the late 1800s to early 1900s during colonial New Zealand. At this point in time, fabrics and textiles were not produced in New Zealand, and settlers were warned to bring many clothes with them from overseas because of this. By the late 19th century, fabric and textiles was New Zealand’s biggest import. Consequently, women made their own clothes, as well as their children’s. For many, christening gowns were handmade and were traditionally passed down within the family.

One example in MOTAT’s collection is a christening gown roughly dated to 1890–1900. Donated by Mrs Jerome of Whenuapai in 1969, this garment was believed to be 70 years old at the time of donation. Completely handsewn, this gown is made from lawn cloth, a sheer cotton fabric often used for handkerchiefs or undergarments. The yoke consists of a panel in broderie anglaise design and trim. The neck has a scalloped trim, and the sleeves are short and likewise decorated with broderie anglaise. The skirt has extensive broderie anglaise detailing, with two panels that extend from the waist down to the hem, creating the appearance of an overskirt. Gathered at the waist, the garment has two ties, one at the neck and one at the waist.

Broderie anglaise is a common feature amongst the christening gowns in MOTAT’s Collection. A whitework needlework technique, this decoration consists of a series of patterns of eyelets; cut-outs of a round or oval shape, which often form designs of flowers, leaves or vines. To craft this design the maker would require a sewing kit comprising of needles, scissors and thread as well as an awl. This can be seen in the examples of sewing kits and awls within the MOTAT Collection. The time and dedication involved in making broderie anglaise by hand reflects the care and pride and element of display that we infer from the use of these intricate christening gowns. Present-day broderie anglaise is produced by machine. Broderie anglaise was a popular feature of christening gowns from the mid-19th century. The MOTAT examples display both handmade and machine-made techniques.

A second example (1985.50.10) within the MOTAT Collection is different in design. Embroidered from organdie, a cotton fabric, this garment is shorter in length with very short sleeves, a round neck and decorated with two buttons down the back. There are three vertical panels of lace tucks from the neck, joining another, horizontal, band of lace. Below this is another decorated band of lace of which the skirt is attached, consisting of a floral net and a scalloped hem. The neck and sleeves are also adorned with a lace trim. This garment was donated to MOTAT in 1985 by Mrs M. C. Gillespie of Otahuhu. Dated to 1920, this christening gown was amongst a small collection of clothing from the 1920s donated by Mrs Gillespie.

Christening gowns reflect the growing textile technology of the period, transferred across continents as early settlers made their way to New Zealand from places such as England and Scotland. The christening gowns in MOTAT’s Collection reveal not only a demonstration of creativity and fine handiwork, but also remind us of the social history; the development of clothing production within New Zealand, as well as the social and religious connotations linked to the wearer. 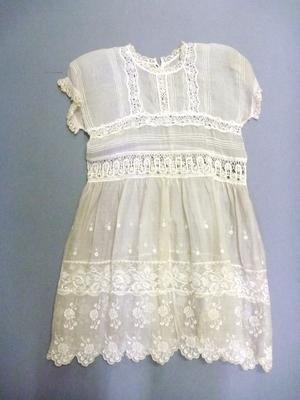