Time Flies When Having Fun 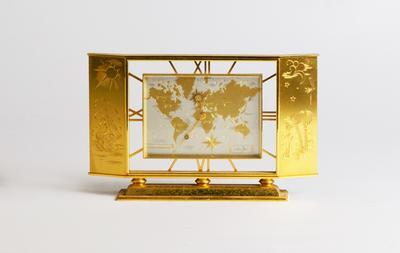 World Desk Clock (T2936)
This gold metal desk clock is one of the more visually ornate clocks within the MOTAT Collection. Bordered by Roman numerals, the clock face depicts a map of the world, with two stylised hands in the centre. The map shows the major continents –although we can’t help but notice that New Zealand is absent! The text on the map is written in French, noting the different oceans and large areas of land. A star compass is visible in the lower half next to a text box with the label, “Saint Blaise”. This suggests the name of the manufacturer, or the location of manufacturer, which could have been in Saint Blaise, France. On either side of the clock is a wing with an etched image. On one side is a scene of a sailing ship, the other depicts an Arabian night. This clock is a beautiful and unique addition to the MOTAT Collection.

Toy Clock (T10280)
This next clock really is quite fun – it’s a toy! This constructional clock was found in our collection; we don’t know who donated it, but we know it was manufactured in England. Labelled, “The Sports Constructional Clock”, this object is a kitset, meaning it is bought in a mass of components which the buyer then assembles to create the end product – in this case, a clock! The clock itself appears to have been partially completed, made up of an octagonal cardboard face decorated with sports imagery. Two black hands, a pendulum arm and weight, as well as several cogs and gears have also been included.

Trish Organ Grinder Clock (1973.130.3)
The Trish Organ Grinder Clock is quite different than the previous two examples – as seen in the image above, the clock is wound by a figurine! Donated to MOTAT in 1973 this clock is crafted to appear as a box-cart, with two handles and a chain and yoke attached to the front of the clock. One of the large wheels acts as the clock face, decorated with gold-plated Roman numerals and two stylised hands. What is unusual about this clock is the figurine attached. Unfortunately, this figure lost his head – literally – putting it in the running for one of the creepiest objects in the MOTAT Collection! Wearing black knee-high boots, a tattered green coat and a red scarf, the figurine’s right hand grasps a turning handle attached to the box-cart. When wound, the figurine’s arm turns the handle, forcing music to play from the clock. It’s safe to say that this is a unique contribution to MOTAT’s Collection.

Hummel Clock (T10255)
Perhaps, more recognisable to some is this illustrated Hummel clock. Hummel is a well-known German manufacturer famed for their porcelain figures (known as Hummel figurines or Hummels) which are based on the drawings of Sister Maria Innocentia Hummel. The drawings were produced from the 1930s onwards in Germany, many depicting scenes of pastoral children. This clock has a plastic frame with a small clock mounted inside. Surrounding the clock is a Hummel illustration of Little Boy Blue with a horn, pointing at a crow. Whilst the clock depicts a Hummel illustration, the clock itself was made by Princess Art in Western Germany, the date unknown. Today you can find the largest collection of Hummel figurines at the Museum of Hummels in Illinois in the United States of America.

Birdcage Cloc (T3254)
Another German manufactured clock, this rectangular clock features a birdcage – most unusual! The front of the object has a clock face on the left side with gold numbers and hands. Glow in the dark dots decorate the face at each number, and line the minute and hour hands. On the right side of the clock, however, is a small, protruding gold cage housing a bird miniature made from black and red feathers. The bird sits on a branch decorated with flowers made from a white fabric. The surface of the front of the clock is made from white enamel with gilded strips on the edges, and the top and rear are also gold. This is MOTAT’s only clock which features a birdcage!

Cowbell Clock (T9420)
Lastly, we have a small clock made from a metal cowbell. Painted brown, this cowbell has had a wind-up clock mechanism mounted inside, and a gold numbered clock face painted on the exterior. There are also two painted flowers on either side of the clock face. Whilst we do not know who donated this object, a small sticker names the manufacturer, “H. GIROD / Fabricant / COURT J.-b”. Girod was a French firm which produced clocks from the 1930’s into the 1960’s. It is believed that their clocks were often produced in the Art Deco style, reminiscent of the style present in France pre-World War One. Does this clock ring any bells for you?

These examples of timepieces prove one thing: technological creativity can be found in even the most household of objects. Whilst these clocks may not hold strong ties to New Zealand, they are celebrated for their unusual traits, unlike many other timepieces in New Zealand collections. Their strong visual impact makes them worthy contenders for future display, as their unique qualities draw you in and remind you of the large variety of timepieces throughout the ages. Do you have any weird or whacky clocks at home? If so, share them with us on social media - we’d love to see them!
So, will you see these clocks on your next visit to MOTAT? Time will tell!

Time Flies When Having Fun 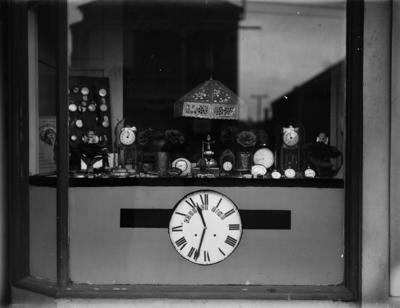