Time According to New Zealand 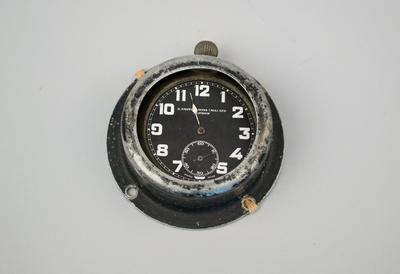 Clocks are some of the oldest inventions in the world and a great example of how technology has rapidly changed and developed over the millennia. From sundials and hourglasses, to the digital clocks used today, these pieces of technology represent a continuous need to measure time within all aspects of daily life. MOTAT’s vast collection of timepieces includes carriage clocks, mantel clocks, pocket watches, wristwatches, and alarm clocks to name a few. This article aims to transcend time, highlighting some of the timepieces that MOTAT holds, which have a unique or interesting connection to New Zealand’s history.

Time to Fly: Jean Batten’s Stopwatch
Stopwatch, 2017.45.3.
One of the most exciting objects within the timepiece collection is Jean Batten’s stopwatch. Jean Batten was born in Rotorua, New Zealand in 1909, and was famed for her record-breaking solo flights across the world during the 1930’s. This included a return flight from England to Australia in 1933, as well as becoming the first woman to fly solo across the Atlantic in 1935. Batten then made the first direct flight from England to New Zealand in 1936. During World War Two Batten became largely reclusive, retiring from flying and settling in Spain with her mother, where she later died in 1982. Regarded as “The Garbo of the Skies”, Jean is still regarded as New Zealand’s greatest aviatrix, celebrated for her achievements both during and after her lifetime.

Batten’s stopwatch, pictured above, was donated to MOTAT in 2017 by Auckland International Airport as part of a collection that included her white leather flying cap, planisphere, and logbooks from her Percival Gull aircraft. These objects have been added to the larger Jean Batten collection held by MOTAT. The stopwatch is placed within a navigational dial, manufactured by Smith & Sons, London. Smith & Sons were well known for their production of timepieces, including aviation instruments. The numbers are divided from 1 to 12, then sectioned by seconds reading 10, 20, 30, 40, 60. A small dial rests at the ‘6’ position. This stopwatch accompanied Jean Batten on her remarkable flights that saw Jean and New Zealand contribute to the history of aviation worldwide. With its worn exterior this stopwatch was well loved by Batten, its condition highlighting its importance to her during her travels and reminding us of the extraordinary feats she accomplished during her day.

A Test of Time: Littlejohn and Son
Grandfather Clock, T6351.
Despite the huge range of timepieces, MOTAT has only two grandfather clocks within the Collection. One example is this grandfather clock, consisting of a wooden case with two glass windows and a pendulum. Grandfather clocks are usually tall and freestanding, but this object measures at just over one metre. This clock is unique due to the way the clock face has been positioned further down its body to display the internal mechanism. A maker’s mark reveals that the clock structure was made in England by Gent & Company Limited, who specialised in electric clocks.

Printed on the face of the clock, however, is the maker’s mark: “LITTLE JOHN’S / ELECTRIC / MADE IN ENGLAND”. Littlejohn and Son, Watchmakers and Jewellers, resided at 85 Lambton Quay, Wellington. Originating in Scotland, Littlejohn and Son was started by Wilson Littlejohn, his son Alexander Ironside, and his nephew, Peter Still. Learning their trade in Scotland, Littlejohn arrived in New Zealand in 1879 taking up residence in Wellington, whilst Still went to London, the centre of chronometer manufacture. The business provided consumers with a variety of timepieces as well as jewellery and optical goods.  They also imported their stock from overseas, such as this grandfather clock, as the company could not manufacture on the premise.

Whilst you may not have heard of this company before, they are also responsible for many of the recognisable clocks seen around New Zealand urban centres. They produced many of the turret clocks seen on the original Post Office Buildings around New Zealand, as well as the Auckland Art Gallery clock (formerly the Auckland Public Library), which is the only New Zealand made clock in Auckland City. This grandfather clock is therefore an example of early Kiwi ingenuity, as it demonstrates technology produced by an early New Zealand company, which has important connections to structures still seen in the community to this day.

Watching Early Businesses: J. Mortensen, Palmerston North
Pendant Watch, F125.2001.
Timepieces also include those worn by individuals. This ladies pendant watch would have been worn around the neck on its long filigree chain. The clock face has a white enamelled dial with Roman numerals and only two hands; an hour and minute hand. What is most exciting about this pendant watch, is the inscription, “J. Mortensen Palmerston North”, printed on the dial. John Mortensen, Watchmaker and Jeweller, was a business located at The Square, Palmerston North, which opened in 1898. The premises consisted of show windows and glass show cases to display a range of imported goods. At the rear of the premise was a workshop in which repairs and engraving were in operation.

This pendant watch was therefore likely imported and then sold by this early New Zealand business who would engrave their maker’s mark onto the clock face. A consumer would have purchased the watch here, which has eventually ended up in MOTAT’s Collection. This object is significant to MOTAT due to its connection to local history, the watch trade in New Zealand and it draws attention to early technological practices in relation to the timepiece industry.

Still Ticking: Pasoces the Jewellers
Wristwatch, 1982.1351.2
Similarly, to the pendant watch, MOTAT holds several examples of wristwatches which feature the mark of Pascoes, a Jeweller still familiar across New Zealand to this day. The business was founded in 1906 by James Pascoe at Three Lamps, Ponsonby, Auckland, as rent was cheaper than the main shopping strip, Karangahape Road. Focusing on repair work, including for other jewellers, Pascoe built up the business, eventually able to move to Karangahape Road. Pascoes incorporated in 1937 and slowly spread across the North Island. Jewellery was a high priority within luxury goods and incomes and cities grew in the early 1900s. Pascoe meet the challenge of malls, which greatly affected street stores, by opening shop branches. In 1980 the company started expanding to the rest of the country. The jeweller is still a well-known brand here in New Zealand, headed by the James Pascoes Ltd Group of Companies which also owns popular stores such as Farmers, Whitcoulls and Stevens.

This example is engraved with the “Jas. Pascoes / Auckland & Hamilton / Swiss Made”. This implies that the internal clock mechanism was imported from overseas, originally made in Switzerland, and then sold by Pascoes, likely before national expansion. A round wristwatch, the clock face has a white dial and two hands, a minute and an hour hand. This is a mechanical, hand-wound wristwatch, fitted with a brown leather strap. MOTAT has three examples of wristwatches under the James Pascoe brand, which highlights the progression of Kiwi technology throughout the 20th century.

Do the Crime, Do the Time: Dorey Lester & Co.
Chronograph, 1982.1379.
This chronograph has an unusual link to a story of international fraud. A chronograph is a stopwatch combined with display watch.  Used by divers, astronauts, the military, aviation and car racers, the chronograph allows the ability to measure time with greater accuracy. In this example, the chronograph is enclosed in a brass case with a white dial decorated with Roman numerals. There are three hands; the minute, hour and chronograph hand. Inscribed on the clock face is the text: “Specially Examined / Dorey Lester & Co. / Centre Seconds Stop Chronograph / Kilburn London England / Swiss Made”. The manufacturer, Dorey Lester & Co. was founded by Dorey Lester (b. 1853) of Essex. Supporting five children as a clockmaker, Lester was recorded as bankrupt in 1886.

In 1906 a letter to the editor published in the Greymouth Evening Star tells the tale of a group of friends from Christchurch who fell victim to a watch scam. Upon viewing a circular advertising twenty guinea gold watches for a mere few shillings, they sent their money to Dorey Lester & Co., however they never received their watches. When they heard their friend was travelling to London, they asked if he may visit Dorey Lester & Co. at the address listed on the circular. Upon arrival, the friend found a private residence with a very apologetic Dorey Lester. Lester claimed that they were only imitation watches and had been so in demand he had run out of stock, but his friends were next on the list. The friend pointed out that the money had been sent two years earlier, and Lester agreed to give him the watches to send back to New Zealand.

In 1907 Lester was arrested for charges of obtaining money and watches under false pretences, as his business was largely run through sending circulars to the Colonies. At Lester’s home, the police found little stock, 2,000 letters of complaint, and 233 pawn tickets in which Lester would take advance payment on watch repairs then pawn them. The police had also received complaints from as far away as New Zealand, Australia and India, going back 27 years whilst Dorey Lester & Co. had only been in business for 30 years. The news of his arrest was documented throughout New Zealand newspapers, citing “the master swindler”, the “swindling jeweller” and the “cheap watch fraud”. Ultimately Lester was sentenced to three years imprisonment with twelve months hard labour, and eventually died in 1931.

As these various examples have shown, timepieces provide a range of connections to New Zealand. Whether they relate to aviation pioneers, early New Zealand businesses, adorn our public buildings, or were involved in acts of international fraud, timepieces are as relevant today as they were when they were introduced to New Zealand. Timepieces come in a range of formats and are used for a variety of reasons, highlighting the technological progression throughout the centuries. MOTAT celebrates this technological innovation, as seen throughout the broad range of timepieces within the Collection.

Time According to New Zealand 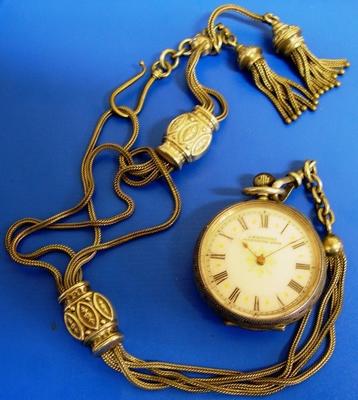 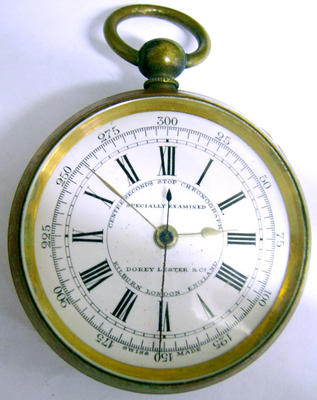 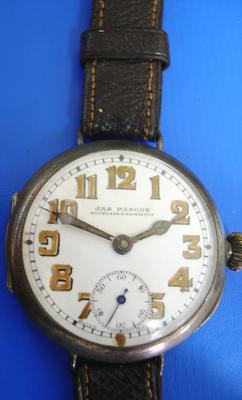