Some Assembly Required: A Brief History of Early Ford Assembly in New Zealand 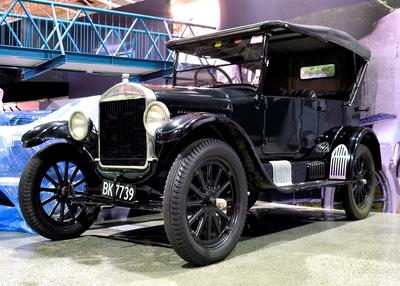 The Ford Motor Company is a hugely successful multinational company. It was established in Dearborn, Michigan by Henry Ford in 1903. The development and launch of the Model T in 1908 was responsible for the company’s early success. It was particularly important as it was mass-produced by assembly line and was more affordable for the masses. It was an extremely popular model both domestically and overseas. In New Zealand, the Model T proved very successful resulting in Ford dominating the country’s car market for several decades. By the time model production ceased in 1927, 90,000 Model Ts had been sold across the country.

The Colonial Motor Company (CMC) secured the Ford franchise within New Zealand from the Ford Motor Company of Canada in 1908 and was the dominant Ford dealer until 1936. From 1910, they began importing CBU (completely built up) Model Ts. From 1921, CMC began assembling Model T Fords at their custom-built assembly plant in Courtenay Place, Wellington.

Before WWI, the British import industry in New Zealand had been roughly equal to their North American rivals. However, British exports declined steeply during the war, as factories shifted their focus to producing vehicles and munitions for the war effort. This meant that Fords in New Zealand were primarily imported from Canada until 1932 when The Ford Motor Company (England) Ltd. (established 1911) opened their factory in Dagenham, East London in 1931. This factory manufactured vehicles specifically to be exported overseas, creating direct competition for the Canadian export market. North American cars were generally preferred by New Zealanders as they could deal with the country’s sometimes challenging terrain. Canada’s dominance was further tested by Governmental changes during the 1930s which favoured British imports.

Despite the economic turmoil of the Great Depression (1928–33), Britain’s economy had greatly improved by the 1930s. Ford’s Dagenham factory was producing more than 200,000 vehicles a year and was the largest Ford plant outside America. While larger vehicles continued to be imported to New Zealand from Canada, smaller Ford models were produced in Dagenham for export. Small Ford cars were developed in response to the demand for smaller cars outside North Americas they were cheaper and more economical to run, especially in urban environments.

In 1935, Ford wanted control of the assembly of its vehicles in New Zealand and took over from the Colonial Motor Company. The Ford Motor Company of New Zealand Limited was incorporated in late 1935. The company built its own assembly plant at Seaview, Lower Hutt in 1936.

British-manufactured Fords (in CKD form) increased in popularity over their American counterparts in New Zealand from the 1930s due to the New Zealand Government raising tariffs for non-British cars. The main reason for this import tariff change was to encourage reciprocal trade with Britain. While 80% of New Zealand exports were transported to the UK, only 17% of vehicles imported in New Zealand were of British origin.

The Customs Amendment Act of 1934 altered the duty on vehicles that were imported into the country. Importing complete vehicles (CBU — Completely Built Up) accrued a high import tax. To avoid this, the tax rate was much lower if the vehicles were imported in a disassembled or Completely Knocked Down (CKD) kit form. Once in New Zealand, the car would be assembled using a large percentage of locally sourced materials. This was beneficial for the country’s economy. From the 1st of January 1935, British CKD vehicles only accrued 5% duty, while CBU cars accrued 15% duty. For all other countries except Canada, CKD vehicles attracted 50% duty, and CBU was 60%.

As a result of these changes, the assembly industry in New Zealand grew rapidly. Since the Great Depression, there had been a high unemployment rate across the country. Prime Minister Michael Joseph Savage’s Labour Government (in office 1935–1940) actively encouraged New Zealand’s assembly industry as the jobs it created for New Zealanders was a way to assist in the country’s financial recovery. As a result of these measures, the number of New Zealand assembled cars between 1933 and 1938 rose more than six times.

MOTAT’s 1936 Ford 10 Model CX in green is an example of a British-manufactured Ford. This model was produced between October 1935 and March 1937. The Ford 10 Model CX was designed in Dearborn, US, but was manufactured in Dagenham, UK. This model was the successor to the Model C. The Model C was introduced in 1934 and was produced until 1935. It was advertised as “streamlined” and its engine performance was one of the most notable features of the car — providing fast acceleration. Both models were popular in New Zealand for their compact size and fuel economy.

MOTAT’s vehicle is identifiable as a Model CX from the ‘chevron’ shaped design across the front of the radiator grille. This vehicle was shipped from Dagenham to New Zealand as a CKD (completely knocked down) kit and was assembled at the Ford Motor Company factory in Seaview. From 1936, New Zealand assembled vehicles carried a hand stamp on the front of the battery box. MOTAT’s example holds this unique New Zealand identifier.

The Ford Motor Company of New Zealand continued to assemble cars on the site until 1988 when vehicle assembly ceased. The New Zealand Government removed the duty from imported vehicles under the Motor Vehicle Industry Plan (1984) due to the realisation that it was now cheaper and more efficient for vehicles to be assembled in their country of manufacture. This brought an end to the age of vehicle assembly in New Zealand.

Some Assembly Required: A Brief History of Early Ford Assembly in New Zealand 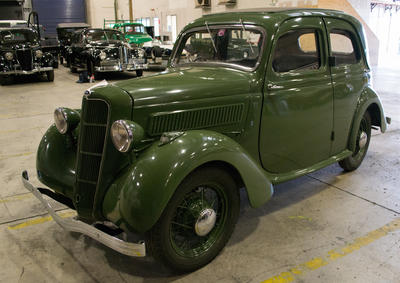