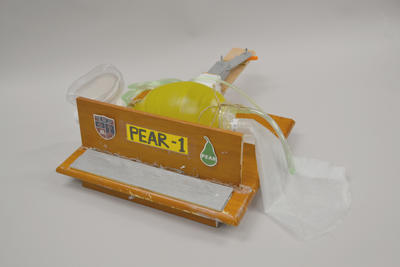 In April 2020, while we were still in the throes of New Zealand’s Level 4 lockdown, curatorial staff at MOTAT, like staff in other museums in New Zealand and around the world, were beginning to think about collecting objects telling the stories of the pandemic. The objects we were interested in were naturally those that connected with the museum’s focus on technology, and our particular emphasis on highlighting New Zealand innovations.

In those early days, when the world was hampered by global shortages of vital equipment from personal protective equipment to life saving ventilators, innovators leapt into action to provide solutions as manufacturers struggled to meet demand. New Zealand, although not at the mercy of shortages to the same extent as other countries with overloaded health systems, also saw this surge in innovative solutions, many of which employed New Zealand’s No 8 wire mentality. A headline on RNZ’s website, “High school students create working ventilator from wood, Lego” caught my eye in late April as it seemed to capture the essence of innovation in those strange and isolated times. As a curator, you are constantly attuned to stories and snippets in the subject areas you work with, and then delighted when you make contact out of the blue and receive a positive and enthusiastic response, as happened here.

MOTAT has collected, and continues to collect, examples of ventilator prototypes developed by innovators from medical and engineering backgrounds. This touchingly humble prototype, developed by seven students from St John’s College, Hastings, embodies the drive to help and the need to think innovatively in an object that is completely relatable to one of the key audiences MOTAT seeks to inspire, our younger visitors. Who else might think to use Lego? A perfectly reasonable yet also quite fantastic to solution to not being able to pop down to the shops.

The PEAR-1 ventilator prototype was created during Level 4 lockdown in direct response to the low numbers of ventilators reportedly available in New Zealand in early 2020. The seven Year 12 and 13 students behind it are members of Project Pear, a group formed through the social enterprise programme at St John’s College. Their aim was to produce a low-cost ventilator, and then open source their design to allow others with greater capability to both improve on the design and implement it, producing larger production runs wherever in the world low-cost ventilators might be needed.

As this was a group project, the enforced isolation of lockdown meant the students needed to use various means of communication, in particular Zoom and Facebook Messenger, to develop the prototype. Dylan Wijaya was tasked with making the ventilator, this one and the three less successful ones that preceded it. Dylan drew mostly on the materials available in his home, however, the Ambu mask and bag, which are key to supplying oxygen, are elements that the students couldn’t make themselves. They reached out to the community, and the Hawkes Bay District Health Board generously gifted these. A power source was also needed and, for this example, the final of four, Dylan used his father’s drill. Understandably, his father wasn’t keen to say goodbye to his drill and the prototype as collected by MOTAT is without a power source. The prototype can be seen in action, however, in video footage that Dylan supplied.

This video is important supporting documentation from a curator’s perspective, not only because it allows us to see and show the complete prototype in operation, but also because a number of the components are modern plastics and intended only for a single use, specifically the Ambu mask and bag (for manual resuscitation). The lifetime of these components is limited so having this record for posterity is important.

The PEAR-1 ventilator is an example of a New Zealand innovation that uses easily sourced materials to develop an affordable solution to a problem.  Project Pear’s use of contemporary communication technology, specifically Zoom, talks to the significant upsurge of such communication technologies and the connectivity and innovation they allowed during New Zealand's Level 4 lockdown. Although the prototype was not developed further, it aligns with other prototypes in the MOTAT collection such as Dr Keith Alexander’s Springfree trampoline model, also made from materials found in the home, and shows us that the germ of an idea expressed through a sometimes rough and ready model, is the starting point for all innovations – both those which become a successful, fully realised product and those which simply show an alternative way of approaching a problem. 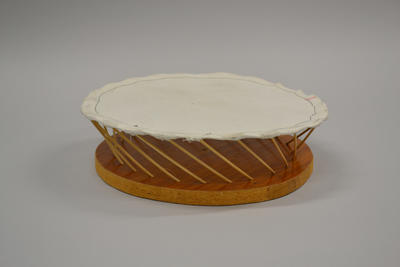