In Stitches: A Selection of Sewing Machines 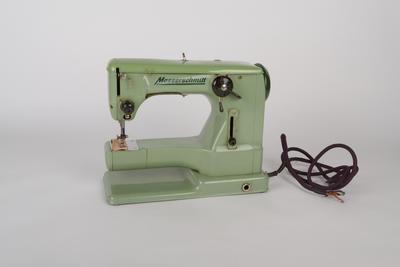 The Right Choyce: The Robertson Reversible Sewing Machine
This red sewing machine has a unique New Zealand connection: it was donated to MOTAT by the New Zealand department store Milne & Choyce. Formed in 1866, the company was established by two sisters, Mary Jane and Charlotte Milne. The store was known as Misses Milne until 1876 when Charlotte’s husband, Henry Choyce, became a partner in the business and the name was changed to Milne & Choyce.  Starting as a drapery business, the store continually expanded its stock to include a range of fashionable clothing. In 1874 the business opened a large shop on the corner of Queen Street and Wellesley Street, later moving again further along Queen Street towards the port, to a nine-story building designed by the Auckland architect Llewellyn Piper. The business expanded regionally and opened more shops throughout the Auckland suburbs. During the 1970s shares were sold and by 1976 there was only one store left, trading as Milnes. By 1990 this store had also closed, ending the long reign of Milne & Choyce.

MOTAT’s Milne & Choyce gifted Robertson sewing machine is small sized and red in colour. The machine has an electric motor, hand wheel and knee treadle for operation. It was manufactured by the Robertson Reversible Sewing Machine Company Limited, who were the Australian and New Zealand distributor for Elna, a Swiss company. The donation of this sewing machine by Milne & Choyce in 1975 suggests this object was likely donated at the closure of one of the stores. It is possible this particular machine was used by tailors in-store, or it was a popular model sold by Milne & Choyce. This sewing machine therefore contributes to the legacy of a great New Zealand retailer and is a unique addition to MOTAT’s collection of sewing machines.

Miniatures and Toys
This sewing machine is regarded as a ‘miniature’ or a ‘toy’. Made in Germany, it has a small metal frame and fully functional mechanism. A crank wheel placed on the side of the machine operates the needle. The machine is black, decorated with a floral pattern in red, green, and gold. These miniature sewing machines are regarded as toys as they are intended as educational tools for children. Sewing was seen as an essential skill, particularly for women, and these machines offered early teaching on a basic machine. Whilst ‘toys’, these machines were able to sew handkerchiefs, small bags, and other light work. The size was also ideal for making dolls clothes, perfect for teaching a child whilst also doubling as a hobby. Over the decades, as sewing became less of a required skill, miniature sewing machines were built with plastic components, adding to the ‘toy’ feel. Toy sewing machines can still be purchased today, largely manufactured from plastic.

Industrial Innovation
Most people have heard of the sewing machine manufacturer Singer, but have you heard of a Singer Industrial Embroidery Machine? Dating to circa 1945, this machine was donated by a Northland resident in 1994. It is made up of six Singer sewing machines which are attached at the base to a metal-framed desk. A rod runs along the desk, connecting all six sewing machines via the wheel on the rear of each machine. This rod continues to the end of the desk where it is attached to a weight mechanism and two different sized wheels. The six machines operate in tandem when the wheel is turned.

Each machine is decorated with a floral pattern and has a serial number. The serial numbers identify these sewing machines as 15k models, manufactured in Clydebank, Scotland during 1945, a time when metal was in great demand for the war effort. It is unknown where this machine was used, or if it was assembled overseas or in New Zealand. It is known that the Singer Clydebank factory was subjected to much German bombing during World War Two, yet continued to make sewing machines, desperately needed for sewing army uniforms and encouraging the public to ‘make do and mend’. Whilst this machine’s exact use is unknown, it is evident this machine is an example of ingenuity and innovation, with six machines placed together to create a production line.

It’s a Bird! It’s a Plane! It’s a… Sewing Machine?
One particularly fascinating example in MOTAT’s Collection is the Messerschmitt Sewing Machine. Dated to the 1950s, this Sewing Machine has a brown storage case with a fabric pouch inside containing accessories and documents. The sewing machine is pale green in colour and has a range of control levers, dials, and switches to operate the machine. This machine is electric, rather than treadle operated. A needle and small bit of fabric is still attached, as if paused, mid-operation.

What is particularly unusual about this sewing machine is its manufacturer, Messerschmitt, a German company known for their aircrafts which were predominately used by Germany in World War Two. Wilhelm “Willy” Messerschmitt began his career as an airplane designer, creating glider planes post World War One. Attempting to break into the military market, Messerschmitt produced the Bf-109, a fighter aircraft which was used in the Spanish Civil War and then World War Two, one of the predominant models within the Luftwaffe.

Messerschmidt also designed the famous Me 262, the world’s first jet-powered aircraft.
But where do sewing machines come in? After the conclusion of World War Two, Willy Messerschmitt was arrested and imprisoned for two years during the Nuremburg Trails. He was found guilty of knowingly using slave labour in the Messerschmitt factories.

Concentration camps sent prisoners to work in local aviation factories, with Messerschmitt no exception. The two Gusen camps are recorded to have provided 6,000 prisoners for Messerschmitt alone during July of 1944. Messerschmitt’s underground factory relied completely on the prisoners for the manufacture and completion of aircrafts, including the production of the Me 262.

German political prisoner Host Keimling describes the working conditions at Gusen during Messerschmidt production:
“They held a whipcord in their hands, controlling our work. Even the smallest error was considered to be an act of sabotage. Punishment was 25 lashes with the whipcord on one’s buttocks. A Russian was subjected to 30 and a Jew to 50 lashes. There were prisoners from almost all nations. Only a small share of the prisoners were German. Communication during work was not easy. German was the official language. Standard daily production output was 10 wings per shift. Much of it involved manual work. Unskilled prisoners cut, bent, riveted, turned the sheet metal. To warrant faultless production, there was also an inspection phase. Prisoners also took care of this. Russians and Jews were excluded, however. I once overlooked two rivets that had not been set straight. The Zivilmeister reported this to the Kapo. I was punished with 10 cane lashes for each rivet. Once a wing was ready, fifteen to twenty prisoners lifted it out of the slipway and carried it to the spray paint shop.”

Upon his release, Messerschmitt was forbidden to work in the aviation industry. Consequently, he turned to other projects, including a wind turbine, hydraulic turbojet engines and prefab housing. One of his more famous designs is the Messerschmitt KR200 (popularly known as the bubble car) which is a tandem seat, three-wheel car, a design inspired by an aeroplane cockpit. By 1951 Messerschmitt opened a factory producing sewing machines, which were in high demand in post-war Germany. The sewing machines were manufactured until 1959 although sales were low due to poor quality control. MOTAT’s Messerschmitt Sewing Machine is therefore a rare example of technology which tells a much larger story.

Toyota: From Cars to Sewing Machines
Another surprising sewing machine manufacturer represented in MOTAT’s Collection is the Toyota Motor Corporation. This electric sewing machine is made of metal with a thick wooden base and is coloured white and grey. It is operated by an electric foot pedal which, when pressed, controls the power and speed of the machine. Being a portable seeing machine, this Toyota came with a green leather carry case.

Citation
Hames, Emily. 2021. In Stitches: A Selection of Sewing Machines. New Zealand: The Museum of Transport and Technology (MOTAT).

In Stitches: A Selection of Sewing Machines 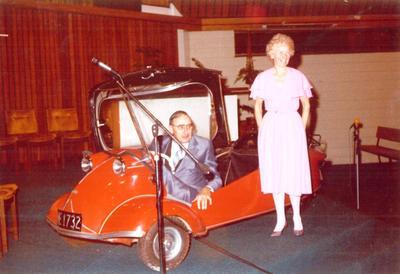 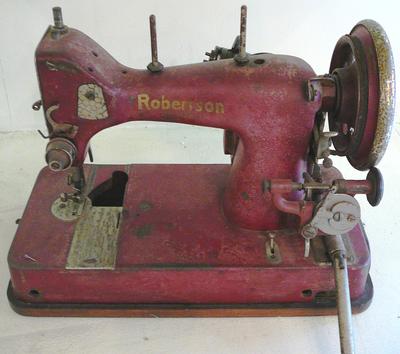 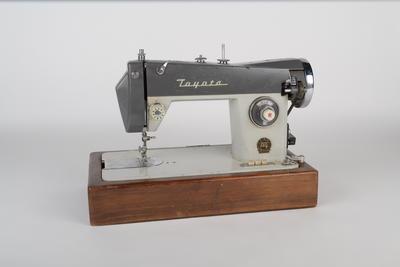