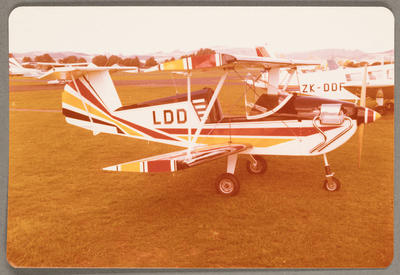 Description
Colour photograph of a ZK-LDD Airsport Scamp parked on grass. View is of starboard side; aircraft has red and yellow and a dark brown[?] stripe; "LDD" is written on fuselage. Tarmac is visible in background with the tail of a aircraft visible on far left side of frame. a ZK-DDF aircraft is visible behind nose of ZK-LDD.