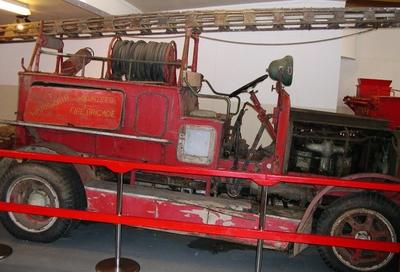 Brief History
The Dennis N fire engine is an early example of the vehicles used by the Auckland Fire Brigade in the early 20th century. After the construction of the Western Springs Pumphouse in 1877, Auckland received a reticulated water supply. This allowed Fire Fighters to be able to attach their fire hoses to high pressure hydrants in the streets. The water pressure supplied to the hydrants was so strong that early motor and steam fire pumps were no longer required.

The Dennis N was supplied to the Auckland Fire Brigade as a new vehicle in 1919. It later went on to work for the Warkworth Volunteer Fire Brigade, where it fought fires until 1945. From 1962 it was in a private collection, stored in a barn until it was sold to MOTAT in 2002.