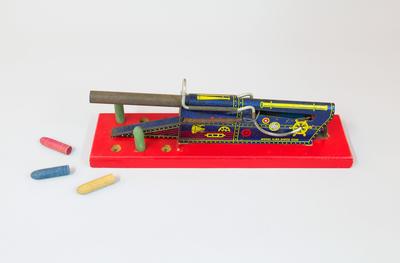 Description
"Siege Gun No.83" metal, toy cannon, on wooden base, with five wooden shells (or bullets), spring-loaded mechanism. Shell can only be put in breach after spring is tensioned (or cocked). Yellow and red graphics (relating to parts of the gun) on a blue background. When fired, the whole cannon assembly springs up and recoils. Box doubles as a target. Has castle and cannon scene on sides, and instructions.

This was my favourite toy when I was a 10 year old in the 1950s. It was really overpowered by the spring, so when you aimed it and pressed the trigger at the back, it sprang upwards and was delightfully terrifying in its power, noise and range of wooden shell! It was strong enough to knock down wooden block castles or, if aimed with care, send the dog sprinting out of the door with his tail between his legs. None of my family liked it. I LOVED it! Eventually something went wrong with the mechanism, and though the High School Metalwork teacher mended it, it soon malfunctioned again. So sad!