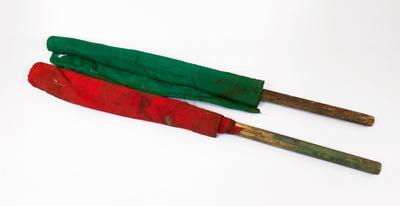 Description
Two flags. Red and green cloth on wooden masts. Railwayman's flags, one red and one green to signal the train to stop or go.

Brief History
These are Rail signal flags which were used throughout railways in New Zealand for communicating to train drivers and other track users whether to stop or go. Flags such as these were used during the late 19th century and into the mid-20th century by NZR station and signal staff, train crews and track workers. Guards on passenger trains carried pocket sized versions to signal the all clear to the driver. These are still in use today, particularly on preserved operating railways throguhout Aotearoa.