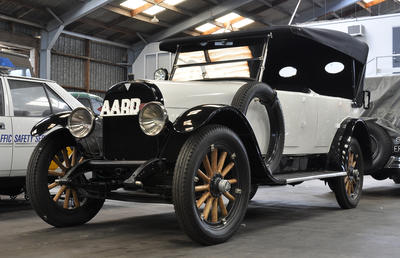 Description
Hudson Super Six Service Car, 7 seater, coloured white with in-line 6 cylinder, 29.4 horsepower engine, 4.735 litre, sliding gears - 3 forward, 1 reverse, petrol. A Service car for AARD. Wooden spokes of the tyre, spare tyre attached to the step on the side of the vehicle. on the hubcap of the tyre reads ' MADE IN U.S.A DETROIT HUDSON SUPER SIX'

Brief History
During 1918 Mr R. Woodcock founded the AARD Motor Services Association of new Zealand which operated mainly in the North Island. He chose the name because it would appear first in the directories. Their slogan was “AARD to say - easy to find” and “Times AARD - business fare.”

Service cars, such as the Hudson Super Six, were used to help transport people around the country during the early 20th century. They operated in a similar way to long-range taxis and ran to timetables. By the 1940s many service cars were replaced by buses.

The Hudson Super Six was a popular model for service cars due to its large front and back seats, and two small folding seats in the back. This car was licensed to carry up to six passengers. Due to the poor condition of the roads, spades, wheel chains and spare parts were carried in case the car became stuck in the mud.