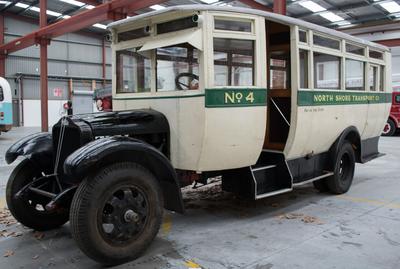 Brief History
This 23 seater bus is the oldest motor bus in MOTAT's collection, dating to the early 1920s. The bus was among the first to have a fully enclosed body, providing passengers protection from the weather, as well as a degree of comfort. As with a number of vehicles of this era, the body was built in New Zealand, but the chassis, being American, was constructed for left-hand drive. This meant passengers had to manoeuvre around the driver as they boarded.

By the mid-1920s, most tramway companies in New Zealand had begun to add buses to their fleets. Buses operated feeder services to tram terminals and serviced suburban developments. White Motor Company truck chassis were among those modified by adding bus bodies to become passenger vehicles.

Originally No.4 was in the North Shore Transport Company's fleet. It served Devonport, Takapuna and Milford. It was then transferred to Waiheke Island. No.4 was last operated on Rangitoto Island, carrying passengers on scenic tours. In 1965, it was barged from Rangitoto to MOTAT where it was subsequently restored.